But we have this treasure in jars of clay to show that this all-surpassing power is from God and not from us. (2 Cor. 4:7 NIV) 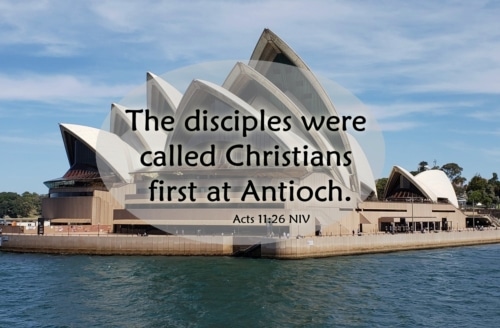 The disciples were called Christians first at Antioch.

There is some debate as to what the name Christian means, little Christ or Christ followers, and who coined the name, whether the disciples

The very first followers of Jesus were all Jewish. They understood themselves to be Jews who were following the long-promised Messiah. The people around them saw those who followed Jesus as a sect of Judaism, not a separate religion. It was only when Jesus’ followers began to reach Gentiles that any question arose about the Jewishness of this faith. And that is what happened in Antioch. The church there was started by Jewish believers. But they were telling the good news of Jesus to the Gentiles. Large numbers of people were turning to the Lord. And the church became primarily composed of Gentiles. So what do you call a group of Gentiles who adhere to a Jewish Messiah and study the Jewish Scriptures?

The name adopted for them was Christian or Christ-follower. It is unclear if that is a name the believers adopted for themselves, or if it was given to them by the unbelievers in Antioch. Many see it as a term of derision that the unbelievers applied to the followers of Jesus. But whatever the source for the name, it ultimately was adopted by the followers of Jesus. A name they took with themselves wherever they went. And still today we call ourselves Christians, followers of Christ.

I wonder; if we did not already have an identifying label today, what would our communities call us? Or would they even recognize that we were different?

I keep asking that the God of our Lord Jesus Christ, the glorious Father, may give you the Spirit of wisdom and revelation, so that you may know him better. I pray that the eyes of your heart may be enlightened in order that you may know the hope to which he has called you, the riches of his glorious inheritance in his holy people, and his incomparably great power for us who believe. - Ephesians 1:17-19 NIV
All Scripture is God-breathed and is useful for teaching, rebuking, correcting and training in righteousness, so that the servant of God may be thoroughly equipped for every good work. - 2 Timothy 3:16-17 NIV