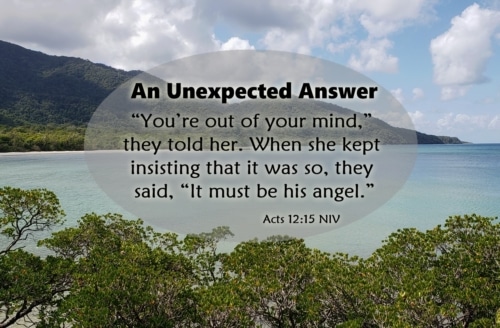 “You’re out of your mind,” they told her. When she kept insisting that it was so, they said, “It must be his angel.”

I have always found this verse amusing, maybe in part because I identify with it. Peter was in prison and the church was praying for him. An angel appeared and busted him out of jail. But when Peter showed up at the prayer meeting going on for his release, the folks praying for him are slow to believe their prayers had been answered, instead assuming the worst. How many times am I surprised when God answers my prayers? But why should I be? Didn’t he promise that if I asked appropriately he would respond? Unexpected answered prayer should not be. We should instead be expecting an answer to our prayer.