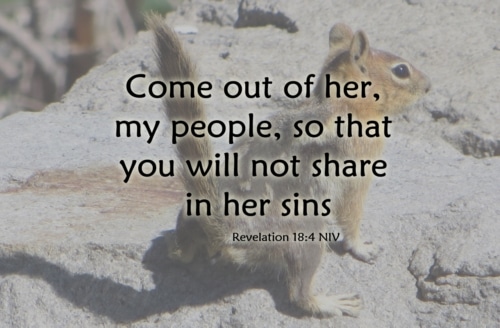 The 17th and 18th chapters of Revelation deal with the great prostitute, Babylon the Great. She is described in detail throughout these two chapters. Yet who she actually is has been debated over the ages and is still unclear. Some have identified her with the literal cities of Rome or Jerusalem. And some have identified her with the Roman Catholic church. Personally, I am partial to Augustine’s “Two Cities” view where Jerusalem and Babylon represent two spiritual realms that are at war with each other. Jerusalem represents those who love God. While Babylon represents those who love this world and the pleasures that it has to offer.

Throughout this chapter we see judgement being executed against Babylon. Including the warning in this verse for God’s people to come out of her lest we take part in her sin and her judgement. We cannot have dual citizenship in the spiritual realm. If we would belong to Jerusalem, we need to abandon citizenship in Babylon and come out from her.