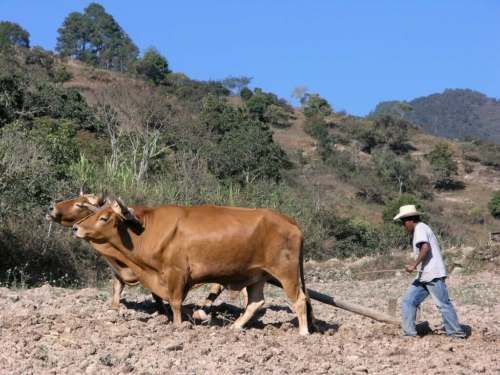 So Elisha left him and went back. He took his yoke of oxen and slaughtered them. He burned the plowing equipment to cook the meat and gave it to the people, and they ate. Then he set out to follow Elijah and became his servant.

Shortly after Elijah’s contest with the prophets of Baal, he was instructed to appoint Elisha to be his successor (1 Kings 19:6). Elijah then found Elisha, threw his cloak on him, and walked away. Elisha apparently recognized what this meant and sought, and received, Elijah’s blessing to say good-bye to his family.

So Elisha returned home, took the oxen he had been plowing with, killed them, cooked them over the wood from his plow, and gave the meat away. Then he set out to follow Elijah.

What strikes me in this account is that Elisha in effect burned his bridges behind him. He wasn’t going to first see if serving Elijah was going to work out; leaving himself a fall back plan. Instead he sold out from the very beginning. There would be no turning back. His former livelihood was gone. He had nothing to return to if following Elijah didn’t work out.

Testing the Water; or Taking a Flying Leap

How unlike so many of us today. When God calls us to do something we are inclined to initially just stick our toes into the pool to test the water, rather than just taking a flying leap out into the middle.

God may still use us, even with that approach. But how much more likely are we to not follow through on his call when it gets challenging. Especially when we have something to go back to. How much better to be sold out without taking thought of having a safety net. Then there can be no turning back. If God has indeed called you, he will also provide and see you through all that may come.