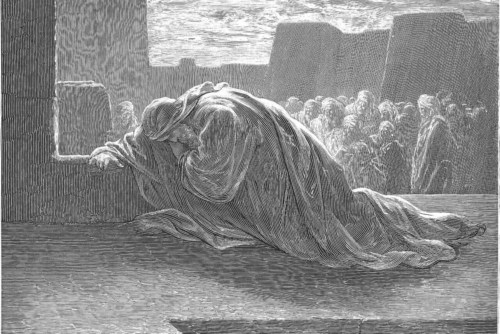 When I heard this, I tore my tunic and cloak, pulled hair from my head and beard and sat down appalled. Then everyone who trembled at the words of the God of Israel gathered around me because of this unfaithfulness of the exiles. And I sat there appalled until the evening sacrifice.
Then, at the evening sacrifice, I rose from my self-abasement, with my tunic and cloak torn, and fell on my knees with my hands spread out to the Lord my God and prayed:
“I am too ashamed and disgraced, my God, to lift up my face to you, because our sins are higher than our heads and our guilt has reached to the heavens.

By all accounts Ezra was a godly man. He was a priest and well versed in the Law. And he had returned to Judea to teach the returning exiles. His devotion to God and his faithfulness were unquestionable.

And yet in this passage we find Ezra broken and ashamed before God. Why? Not because of anything he personally had done or had condoned. But rather because of what other people had done. Some members of the community had married women from the surrounding peoples, contrary to what the Law instructed.

In Ezra’s mind, the sin of these folks was not just a personal thing for them. Their sin was like a cancer that was eating away at the whole community. A community that he was a part of. So the sin was not just that of the individuals. It was the sin of the body, of the whole community. And Ezra took it personally. He took responsibility for it as he took it to God. And then he led out in removing that sin from the community.

Is it any different today? When there is sin within the church, is it isolated to just a few individuals? Or does it impact the whole body? Should I not be broken before God because of sin in the body, and take it personally? Would our churches not be better off if, instead of being accepting of sin, we responding like Ezra or Nehemiah (Neh. 1:4)? To fall down on our faces before God in sorrow and repentance. And then responding to his leadership.