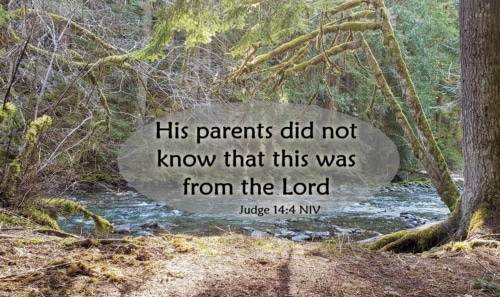 (His parents did not know that this was from the LORD, who was seeking an occasion to confront the Philistines; for at that time they were ruling over Israel.)

Judges is an interesting book. And it has a very interesting and diverse cast of characters. Some of the judges barely get a mention. While others, like Samson, get starring roles. The judges were men, and one woman, who led parts of Israel during the time between Joshua’s death and the inauguration of the kingdom.

Each of these judges came during a time when Israel had turned away from God and were consequently being dominated by neighboring peoples. They would cry out to the Lord, and he would raise a deliverer, which is what the judges were.

It would be easy to image that these judges were godly men who followed the Lord. And sometimes that was true. But just as often these men were quite the opposite. Samson was one of the later. There were times when he would call out to God, but generally only when he was in trouble. But his life was one that showed little evidence of living in obedience to God’s laws.

And this passage illustrates one of those times when Samson ignored God’s law. Israelites were not to intermarry with the nations around them. Yet Samson saw a beautiful Philistine woman and determined that he was going to marry her, even over his parent’s objections.

The author of this account, looking back on it from some time later, added this verse as an explanatory note. This action on Samson’s part was from God. It was an excuse to initiate a confrontation with the Philistines, which it did. But how are we to understand what seems to be God’s direction to Samson to violate the Law he gave them through Moses?

I don’t pretend to understand all that is going with this. But it is clear that God is able to use even the disobedient and their poor choices to accomplish his plan. I do not believe that God was responsible for causing Samson to want to marry this woman. But he did use it to further his plans for Israel. Nothing we do can frustrate God’s purpose. He knew from creation what Samson would do then, and his plan incorporated that action. The sovereign God uses all people, both good and evil, to accomplish his good plan.