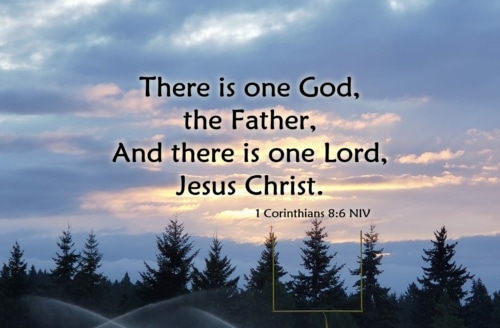 I periodically run into Christians who deny the Trinity, a core doctrine of the church. One of their primary arguments is that the word Trinity is never used in the Bible. That it is a human construct that is not Scriptural. And it is true that the word Trinity is never used in the Bible. Although the word ‘Bible’ is never used there either. But is it true that the doctrine of the Trinity is a man made construct. One that is not taught in the Scripture? I do not believe that to be true. While it is not as clearly defined as we might like, it is clear, especially in Greek, that the writers of the New Testament did believe that Jesus, the Son, was God. As was the Father and the Spirit.

This article is going to take a look at a specific passage that clearly makes the case for the unity of the Father and the Son.

Hear, O Israel: The LORD our God, the LORD is one.

The above verse is a portion of the Shema, a Jewish confession of faith. It is an affirmation that YHWH is their God, and their only God. The name of God came to be considered too sacred to actually say. So when reading the Hebrew Scriptures it would be vocalized as Adonai, the word for lord. Because of that, our English translations use an all uppercase LORD in place of the divine name of YWHW. The word translated as God in this verse is elohim. This is somewhat of a generic word. And it is used to refer to the gods of the nations as well as the God of Israel.

In the Greek Septuagint, the Bible of the early church, YHWH is translated as kyrois. This is a word that means lord and is synonymous with the Hebrew adonai. And elohim is translated as theos, the generic Greek word for god. So in Hebrew the expression ‘YHWH Elohim’ is pronounced as ‘Adonai Elohim’. In Greek it is ‘Kyrois Theos’. And in English it is ‘LORD God’.

Paul and the Shema

So then, about eating food sacrificed to idols: We know that “An idol is nothing at all in the world” and that “There is no God but one.”

In this passage Paul is encouraging the Corinthians believers to be careful about eating meat offered to idols. There is not inherently wrong with it. It is just a piece of meat. But many people in that culture believed this meat was connected to the local gods, and eating it would be very wrong. As a part of his argument he talks about these idols. The idols are nothing. But there is often a spiritual power behind them. And so Paul seeks to distinguish between the gods represented by the idols and the God they had committed themselves to.

“There is no God but one.” While not an exact quote, this clearly comes from the Shema. As in the Shema, this is not a denial of other spiritual beings. Rather it is an affirmation that we have only one God. The gods of the idols (fallen angels) have reality, but they are nothing to us.

A Twist on the Shema

After his affirmation that many people worship these gods, he refers again to the Shema, but with a twist. The Shema affirms that the Lord God is the one God of Israel. Paul says that for the believer there is one God, and one Lord. In English it appears like Paul is referring to two different persons. The first is God the Father. And the second is the Lord Jesus Christ. But when you look at the Greek, a language he was very familiar with, and the language spoken by the Corinthians, you find something else. The Shema affirms there is one YHWH Elohim. Paul says there is one Theos (the Greek translation of Elohim), the Father. And there is one Kyrois (the Greek translation of Adoni, the word spoken in place of YHWH), Jesus Christ.

While this passage in 1 Corinthians is not as explicit in English as we might like, it is crystal clear in the Greek. Paul ascribed to Jesus the personal name of God that is used in the Old Testament. And the more generic name for God/gods is assigned to the Father. There can be little doubt that Paul viewed Jesus, the Son, as closely connected with God, the Father. That they were not two distinct individuals. But that together they were the one God.