Home » Christianity » Bible Study » Forgetting the Past and Looking Ahead – Philippians 3:12-14 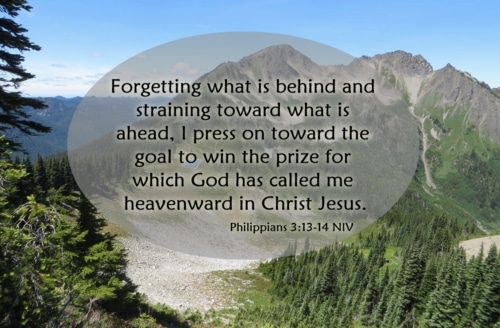 Not that I have already obtained all this, or have already arrived at my goal, but I press on to take hold of that for which Christ Jesus took hold of me.  Brothers and sisters, I do not consider myself yet to have taken hold of it. But one thing I do: Forgetting what is behind and straining toward what is ahead,  I press on toward the goal to win the prize for which God has called me heavenward in Christ Jesus.

Paul’s goal was to become totally identified with Christ. To have his own self drop by the wayside and becoming one with his Lord. It was a goal that he was working hard to achieve. And he was doing two things to help him reach that goal. Forgetting the past, and looking ahead to the future.

The first thing he was doing was forgetting the past. Now Paul did not forget the past entirely. He never seems to have forgotten just where he had come from. And he remembered what others had done for him as well as conflicts with others. But he did not live in the past. He did not allow either his past failures or victories keep him from pursuing his goal. And both of those can be a major impediment if we allow them to.

My past failures can be very discouraging. If I try and fail, especial several times, it can become easy to believe that success is out of my reach; that I am doomed to always fail. I know there are areas in my own life that I struggle with, and fall short over and over. Will I ever have victory over this thing? And sometimes it is tempting to just give up even trying. But I need to forget those past failures. They are in the past and there is nothing I can do about them. But I can prepare for what lies ahead.

I suspect everyone likes to succeed. We feel good knowing that we have accomplished something worthwhile. But there is a danger there as well. I could easily become satisfied that I have accomplished enough. That I have arrived and am where I need to be in my faith. And when that happens I can become complacent and quit growing and developing the way I should. Especially if I am comparing myself with others around me, rather than comparing myself to Jesus and seeing that I still have plenty of room to grow.

Pressing On to the Goal

In forgetting his past, Paul choose to turn his attention to what was to come. I don’t believe that Paul was referring to his upcoming itinerary here, but rather to eternity. God had called him to something, and his focus was fixed on that. His energy was devoted, not to making a name for himself, preparing for retirement, or trying to be successful in this life; but rather to win the prize that God had set before him. And he was not going to let anything get in the way of that, either his past or his present.

And what was this prize? Toward the end of his life Paul looked back on his years of service to his Lord and had no regrets. Even expressing confidence that a crown awaited him.

For I am now ready to be offered, and the time of my departure is at hand.  I have fought a good fight, I have finished my course, I have kept the faith: Henceforth there is laid up for me a crown of righteousness, which the Lord, the righteous judge, shall give me at that day: and not to me only, but unto all them also that love his appearing.

This crown of righteousness is not a physical crown like we sometime might visualize. Rather it is the affirmation of the Master of a life lived in devoted service and an invitation to eternal service in the kingdom.

“His master replied, ‘Well done, good and faithful servant! You have been faithful with a few things; I will put you in charge of many things. Come and share your master’s happiness!’

Paul, in his life and service, was looking forward to hearing God say to him, “Well done, good and faithful servant!” That kept him persevering through all of the challenges he faced, as well as putting aside his own desires in order to be useful in the kingdom’s work. How important is it to me to hear God say to me “Well done!”