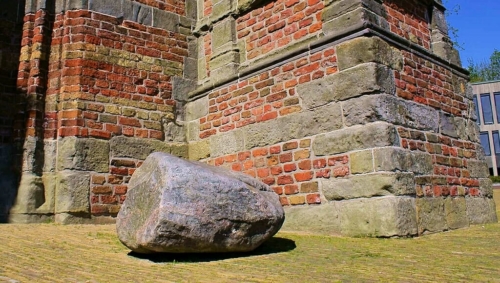 At the close of the Parable of the Tenants in Matthew 21:33-46, Jesus quotes from Psalm 118:22-23, a passage that talks about the stone the builders rejected becoming the cornerstone.

Jesus said to them, “Have you never read in the Scriptures:
“‘The stone the builders rejected
has become the cornerstone;
the Lord has done this,
and it is marvelous in our eyes’?

Oftentimes when reading this passage the temptation is to read and understand this quotation in isolation from the rest of the passage. But there is much more to it if you consider it as the climax to the Parable of the Tenants rather than just being about a rejected stone.

The Song of the Vineyard

In Isaiah 5:1-7 is found another parable of a vineyard. One that Jesus most assuredly knew about and likely uses as a basis for his parable here. In Isaiah, God is the owner of the vineyard. He clears the land, plants the vines, builds a watchtower and builds a winepress. Then he looks for fruit to be produced.

But the vineyard only produced bad fruit. So he will tear down the surrounding walls and abandon his vineyard. He is not going to invest any more time and effort in a vineyard that will not produce the fruit he wants.

At the conclusion of the parable Isaiah identifies the vineyard as Israel. And the fruit God was looking for as righteousness and justice. But the fruit they produced was bloodshed and cries of distress.

The Parable of the Tenants

Jesus’ parable of the vineyard starts off similar to Isaiah’s but then takes a dramatic turn. Rather than focusing of the fruit, Jesus focuses on those hired to take care of the crop. These are responsible to tend the vines, harvest the grapes and press the wine. And, in the end, to provide the owner of the vineyard with the produce.

And from there Jesus responds with the quote of the rejected stone becoming the cornerstone.

A Wordplay Between Son and Stone

There is a wordplay involved here that is not evident in English. It is also not available in the Greek the New Testament was written in. But it was there in the Hebrew that Jesus would have been speaking. The wordplay is between the word ‘son’ in the parable, and ‘stone’ in the quotation.

In Hebrew, the word son is bēn. And the word for stone is ’eben. These words have quite different meanings, but would have had a similar sound when Jesus spoke them. The tenants killed the bēn. And the builders rejected the ’eben. It would appear that Jesus is using that similarity in sound to tie these two otherwise disparate passages together.

The ’eben was rejected, and became the cornerstone. The bēn was also rejected and killed. But, just like the ’eben, the bēn would become the cornerstone of God’s new temple (Eph. 2:19-22). Both the stone that the builders rejected, and the son in the parable, were none other than Jesus, the Son of God. While the religious leaders might have rejected him, he was chosen by God.

Once Jesus has told the parable and the related quotation, he delivers the knockout punch. The vineyard represented God’s people, the kingdom of God. The servants were the prophets and the son was Jesus. And the tenants in the parable are none other than the Jewish religious leaders. The kingdom of God will be taken away from the Jewish religious leaders and given to those who would produce the desired fruit. And judgement would come upon those who had rejected the stone. The stone that was Jesus.

And suddenly the Jewish leaders recognized that the parable was directed at them, and they had participated in condemning themselves. To say they were unhappy would be putting it mildly. They looked for a way to kill Jesus, not realizing that in doing so they would actually be playing their part in the parable. And that Jesus also would play his part by falling on and crushing them.