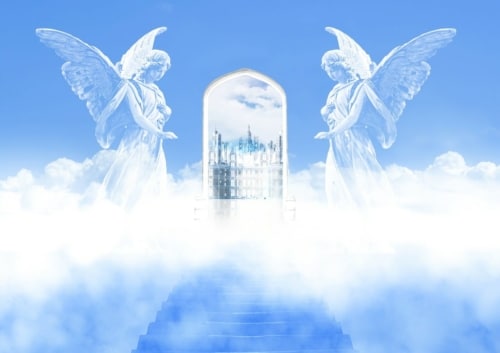 What is heaven? And what is heaven like? These are common questions. With many different answers. But what does the Bible itself have to say about heaven?

In the Old Testament the Hebrew word šāmayim is the primary word translated as heaven. The NIV Word Study Dictionary defines this word as “region above the earth: the heavens: place of the stars, sky, air; heaven: the invisible realm of God.” As you can see, it has a variety of usages.

In the New Testament, the Greek word ouranos is the primary word translated as heaven. This word is defined as “sky, air, firmament, any area above the earth; heaven(s), the place of sun, moon, and stars; heaven, in which God dwells.” Like šāmayim, this word is used in a variety of ways.

Both of these words refer to the physical realm that we live in. But they also refer to the supernatural realm of God. I suspect that is because there was not a clear distinction between the two in the Hebrew mind. The sky is ‘up there’. But God’s throne is also ‘up there’, beyond the stars (Job 22:12). In ancient Hebrew thought, the heavens consist of everything that is ‘up there’.

A Three Level View of Heaven

There is no description of how the Hebrews viewed the heaven in the Scripture. But from the way the term is used it appears like they divided heaven into three regions. The air the birds flew in; the realm of the sun, moon, and stars; and God’s dwelling place.

In Matthew 5:26 Jesus tells his disciples to “look at the birds of the air.” The word ‘air’ here is ouranos, or heaven. Here, as in a few other places, it is referring to the earth’s atmosphere. It is a physical place, a part of the natural world.

In Psalm 19:1-6, David’s psalm begins by expressing the glory of God revealed in the heavens. This passage is referring to the celestial bodies, especially the sun. These heavens were visible to humans, but beyond the reach of the birds that flew through the sky.

Heaven as the Dwelling of God

In Psalm 11:4, Psalm 103:19, and Isaiah 66:1, we read that God’s throne is in heaven. In Isaiah 6:1, Isaiah has a vision of God sitting on his throne, high and exalted. And in 1 Kings 8:27-53, Solomon identifies heaven as God’s dwelling place. At the beginning of this passage Solomon acknowledges that even the highest heaven cannot contain God.

In 2 Corinthians 12:1-10 Paul shares an experience of being caught up to the third heaven, the dwelling of God. He identifies this place as being synonymous with Paradise, the Paradise that Jesus promised to share with the repentant thief on the cross.

The Kingdom of Heaven

Jesus came proclaiming the coming of the kingdom. Matthew calls it the Kingdom of Heaven while Mark and Luke use the term Kingdom of God. It is a spiritual kingdom that Christ rules over. A kingdom that includes all the redeemed. While this kingdom has eschatological ramifications, it is a kingdom with present day reality.

This kingdom that Jesus proclaimed reflected a dramatic shift in thought. The coming kingdom had been envisioned as a physical earthly kingdom centered on Jerusalem. But the kingdom Jesus proclaimed was a spiritual kingdom without an earthly center.

In the thirteenth chapter of Matthew there are a series of parables. Most of these parables start with the expression “the kingdom of heaven is like.” But for the most part they are not what we might expect. Rather than describing a future abode of believers, they describe heaven as a present reality. A kingdom that is growing; one that is worth all we have; and impacted by unbelievers.

Heaven as the Final Home of Believers

Even though heaven is in some sense a present reality that we are experiencing, there is more to come. As believers we look forward to life beyond this earth and in the fragile tents in which we currently dwell (2 Cor. 5:1-5). But what is that heaven like?

But what heaven itself is like is unknown. 1 Corinthians 2:9 does give us a clue though, “What no eye has seen, what no ear has heard, and what no human mind has conceived – the things God has prepared for those who love him.” What God has prepared for us is beyond our ability to grasp now. It is indescribable to our human minds. So, while we may not know what heaven is like, we can look forward to it with expectation and joy.

Is the New Earth the Final Home for Believers?

Revelation 21:1-5 paints a picture of our future. In it the heaven and earth we inhabit pass away. In their place are a new heaven and earth. And then the New Jerusalem, later described as the bride of Christ (Rev. 21:9) descends from heaven to earth. Finally, the announcement from the throne of God is that he will now dwell among us.

This chapter in Revelation is similar in many ways to the description of Eden, the initial home of humanity. It seems like our end is a return to our beginnings, to what we were created to be in the first place.

If this view of Revelation 21:1-5 is correct, then it would appear that our abode in heaven is temporary. And that our permanent home is on a newly recreated earth.

What Heaven is not

There are a couple of passages that are, at least in popular thought, considered to be descriptive of heaven. In John 14:2 the KJV tells us that there in the Father’s house there are many mansions. Most modern translations use rooms or dwelling places rather than mansions. But it is still common to heard older people talk about their mansion in heaven. I suspect there will be no mansions.

Another passage frequently used to describe heaven comes from the 21th and 22nd chapters of Revelation. These chapters describe an immense city with streets of gold and gates of pearls. But if you look at Revelation 21:9-10, you will find that this chapter is describing the bride of Christ, the church, rather than heaven. It is a symbolic description of the glory of Christ’s bride, and God’s presence within.

The Pearly Gates would also seem come out of this passage in Revelation. The New Jerusalem, the bride of Christ, is described as having gates of pearls with the names of the 12 tribes written on them. But, again, this is descriptive of the bride of Christ rather than heaven.

What does the Bible have to say about heaven? You will find it used for the sky; for the space beyond our atmosphere; and for God’s dwelling place. Jesus frequently talks about the Kingdom of Heaven as a present reality with a future final fulfillment. And heaven is frequently associated with the home of believers when we leave this life. A home in Christ, in the presence of God.

But that ‘home in heaven’ that we look forward to is not described in the pages of Scripture. It is beyond our ability to grasp. But whether our ultimate destiny is in heaven, or in a recreated heaven and earth, it will be glorious beyond the ability of words to describe.

2 thoughts on “What Does the Bible Say About Heaven”