Home » Christianity » Theology » Doctrine of the Church » God’s Temple: Past, Present, and Future 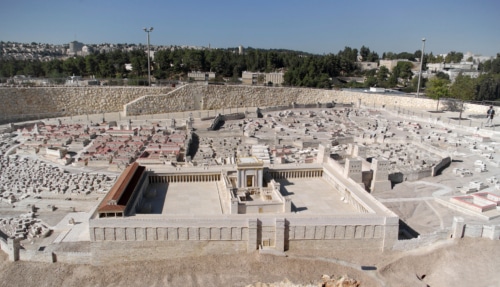 What Is A Temple?

A temple is where people go to meet with their god. As Christians, the two temples we are most familiar with are the ones built by Solomon and by Herod. Solomon’s temple is at the center of worship in the Old Testament period from Solomon until its destruction by the Babylonians. Herod’s temple is at the center of Jewish life in the New Testament period; the place where Jesus and his early followers were often found.

But temples were a common feature throughout the ancient world. Every god of any note had at least one temple built for them, and oftentimes more than one.

The purpose of a temple depended somewhat on religion and location, but in general they were thought of as dwelling places for a god(s). An image of the god would be placed in the temple, symbolizing his/her presence. Sacrifices were offered to the gods there. Priests would minister before the resident god, offering the sacrifices as well as expressing the will of the god to the people.

And this is seen clearly in the Old Testament with the temple built by Solomon. God dwelt, at least symbolically, within the temple. The priests ministered at the temple offering sacrifices. And they were to make known God’s will to the people. What was missing in the Jewish temples was the image of God, something that was forbidden.

The first chapter of Genesis is a creation account. God creates all that is, gives order to it, and declares it to be good. And the last thing he does is to create humanity. But humanity is unlike anything else in the creation. Humanity is created in the image of God. And then humanity is given dominion over the rest of the creation.

I believe that this passage is significant in this discussion about temples. Remember what is placed into most temples when they are completed? The image of the god. And that is what God does as the finishing act of creation. He places his image into his creation. In some way the initial creation is being pictured as a temple.

The Tabernacle and the Temple

It is during Israel’s sojourn at Mt Sinai after the Exodus that God instructs Moses to produce a portable temple; the tabernacle. In Exodus 25:8 God tells Moses to “have them make a sanctuary for me, and I will dwell among them.” Several chapters of Exodus describe the construction of this sanctuary. And even more of Exodus and Leviticus is concerned with how to worship at the tabernacle. This tabernacle traveled with Israel during their wanderings in the wilderness, and continued to serve in some form up until the time of Solomon.

During Solomon’s reign as king a more permanent temple was built. This larger temple was built on the model of the tabernacle described at Mt. Sinai. It was much larger and more elaborately decorated, but still it served the same purpose for Israel. It was the center of religious life for Israel until it was destroyed by Babylon at the destruction of Jerusalem in 586 B.C..

When Judah returned from their Babylonian exile, the Persian government instructed them to rebuild a temple to God, which they ultimately did. And, during the reign of King Herod, the temple complex was greatly enhanced. This is the temple that existed during the New Testament era up until the revolt of the Jews against Rome, and the destruction of Jerusalem in A.D. 70. And there has not been a Jewish temple in Jerusalem since then.

Jesus As the Temple

The Jews then responded to him, “What sign can you show us to prove your authority to do all this?”
Jesus answered them, “Destroy this temple, and I will raise it again in three days.”
They replied, “It has taken forty-six years to build this temple, and you are going to raise it in three days?” But the temple he had spoken of was his body. After he was raised from the dead, his disciples recalled what he had said. Then they believed the scripture and the words that Jesus had spoken.

In this passage Jesus claims to be a temple. A temple that he would be able to raise again in three days if they destroyed it. While those listening to him understood him to be referring to the physical temple complex in Jerusalem, John makes it clear that he was referring to his own body. If the temple was God’s “home” on earth, then indeed Jesus was the temple. He was Emmanuel, God with us.

Jesus spent time teaching in the temple courts, and never spoke against the temple itself, even cleansing it. But clearly he is hinting at a deeper reality in this passage. God is going to be creating a new and different temple.

Today there is no temple in Jerusalem. But in the writings of Paul we see a new temple; the one hinted at by Jesus in John 2:18-22. This temple, rather than being a physical building, is made up of believers.

In 1 Corinthians 3:16-17 Paul tells the church at Corinth “Don’t you know that you yourselves are God’s temple and that God’s Spirit dwells in your midst? If anyone destroys God’s temple, God will destroy that person; for God’s temple is sacred, and you together are that temple.” As believers together we are God’s temple. And God’s Spirit dwells in that temple. As God symbolically dwelt in the temple in Jerusalem, so he now, in reality, dwells within the church as a body. In 2 Corinthians 6:16 Paul again tells this church that “we are the temple of the living God.”

Under the Old Covenant there was a physical temple that the people could go to. But under the New Covenant the people of the covenant are themselves the temple. There is no need to go somewhere to meet with God since he lives within us.

There are those who look forward to a time when a physical temple will once again be rebuilt in Jerusalem. A temple, not for Christians, but for a revived Israel. But I believe this is based on a misunderstanding of the relationship between Israel and the Church. God invites Jew and Gentile equally into the body of Christ; to be a part of the Lord’s temple. He does not have one way to salvation for the Jew and another for the Gentile. Christ’s death on the cross tore down the wall that separated us, and made us into one new man (Eph. 2:11-22).

I believe that the last two chapters of Revelation give us a glimpse of the future that awaits us. In this passage John is invited to see the Bride of Christ, pictured as the Holy City, New Jerusalem. While many picture this as a literal city, John is explicit that it is the Bride. And in this picture of a city John mentions the temple. Or rather he mentions the lack of a temple. In Revelation 21:22 John says that he “did not see a temple in the city, because the Lord God Almighty and the Lamb are its temple.”

This might seem somewhat different than Paul’s description of the temple made up of believers. But I believe that it is actually very similar. Paul describes the body as a temple being a dwelling for God. John, in picturing the body as a city, says there is no need for a temple, because God lives within the body. In both cases God is living within his collected people. There is no need for a temple where we could encounter God. He is always within us. Everything that the physical temple provided is accomplished by God’s indwelling presence.

Under the Old Covenant, the temple, and the tabernacle before it, served to symbolize God’s presence among the people. It was the focus of their worship. But the need for a separate physical structure disappeared at Pentecost when God’s Spirit took up his dwelling within a living temple made up of all believers.