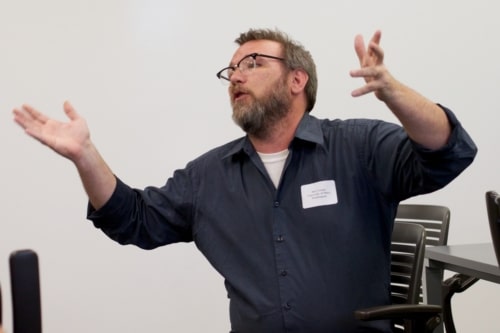 As I urged you when I went into Macedonia, stay there in Ephesus so that you may command certain people not to teach false doctrines any longer or to devote themselves to myths and endless genealogies. Such things promote controversial speculations rather than advancing God’s work—which is by faith.

Paul had established the church in Ephesus during his third missionary journey. As he passed back near Ephesus on his way to Jerusalem, where he was taken prisoner by the Romans, he warned the Ephesian elders that savage wolves would come. Some even from among their own members, distorting the truth and drawing people away to follow them (Acts 20:29-31). Some time later Paul left Timothy in Ephesus to deal with this problem he had foretold.

In this passage Paul was giving Timothy instruction concerning these wolves that had come into the church, distorting the truth. Timothy was instructed to forbid the teaching of this false doctrine. I do not know specifically what this false doctrine(s) was/were. But the specifics of that false doctrine is not important to what Paul is saying here.

It is so important for us as believers to be well grounded in the word of God so that we won’t be led astray by falsehood (Eph. 4:11-16). And, if you are a teacher or leader within the church, it is important to put a stop to the spread of false doctrine. Teaching that only promotes controversy rather than building up the body and advancing the kingdom of God. Hold fast to God’s word. Compare everything you hear against the standard of God’s inspired word.

5 thoughts on “Combating the Teaching of False Doctrine – 1 Timothy 1:3-4”