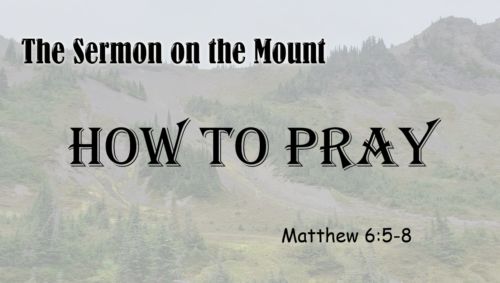 And when you pray, do not be like the hypocrites, for they love to pray standing in the synagogues and on the street corners to be seen by others. Truly I tell you, they have received their reward in full. But when you pray, go into your room, close the door and pray to your Father, who is unseen. Then your Father, who sees what is done in secret, will reward you. And when you pray, do not keep on babbling like pagans, for they think they will be heard because of their many words. Do not be like them, for your Father knows what you need before you ask him.

In this section of the sermon Jesus continues along in the same vein as the previous passage. He is dealing with those who perform their ‘acts of righteousness’ for public acclaim. The previous passage dealt with giving to the poor, and the next one deals with fasting. Here Jesus is talking about prayer.

How Not to Pray

Jesus tells us that when we pray, it should not be like the hypocrites. We use the term hypocrite today to refer to someone who is two faced. One who says different things to different people. Or who says one thing and does another. It meant something different in the first century Greek world, but it carries the same idea. Greek actors wore masks when they performed, changing masks as necessary during the course of a play. And the name given to these performers was hypocrite. In normal usage this was no different than identifying someone who performs in movies as an actor. It was an honorable occupation.

Jesus here is not attacking the professional actors who performed for people’s entertainment. Rather he is being critical of those who wore a mask in real life. In this case the mask they were hiding behind was pious religiosity. They were pretending to be devout followers of God and demonstrating that with long and wordy prayers. But their prayer was only for the acclaim of those who were around them, not for God.

These hypocrites would pray in the most public places they could find. That might be on a street corner. Or it might be in a synagogue, a place devoted to the study of God’s word. The more people who heard their prayer the better. But, God did not hear their prayer. It was not really to him, so there was not reason to expect him to hear it. Their reward was solely the acclaim they might receive from others.

In contrast to the practice of the hypocrites, Jesus tells us to pray in secret. To go into my room and close the door behind me. Prayer, in this case becomes something that is between me and my Lord. This can be intimate and personal. I can share my true feelings. And allow time for God to respond to me. And this is typically how we see Jesus praying. He went off away from other people and spent time with the Father.

Is this an argument against public prayer? Some people take it that way. But there are plenty of examples of the church praying together (Acts 4:31 for instance). But public prayer should still be directed toward God, looking to communicate with him rather than for public acclaim. When we come together in prayer, we are expecting God to be among us. And we are making him a part of our time together. Talking to God. And listening for his response (Acts 13:1-3)

One last instruction Jesus gives here concerns the words we use. Prayer does not become more effective the more words you use. Nor are there any magic, or special, words that enhance the power of your prayer.

People who followed the other religions in the Roman and Greek cultures around them would apparently pray long, and meaningless, prayers to their gods, hoping that they would be heard. Jesus calls this practice babbling, just mouthing meaningless words.

In contrast, he tells us to talk to God, plainly and simply. God already knows what we need. We do not have to convince him of it or be like a two year old begging endlessly. He wants us to come to him, expressing our needs. And when we do, he will respond. We don’t have to twist his arm.

Other Posts in the Sermon on the Mount