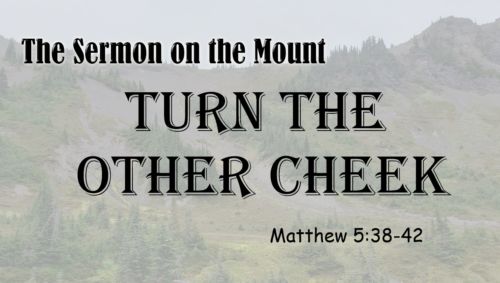 “You have heard that it was said, ‘Eye for eye, and tooth for tooth.’ But I tell you, do not resist an evil person. If anyone slaps you on the right cheek, turn to them the other cheek also. And if anyone wants to sue you and take your shirt, hand over your coat as well. If anyone forces you to go one mile, go with them two miles. Give to the one who asks you, and do not turn away from the one who wants to borrow from you.

How many of us have heard the expression ‘turn the other cheek’? And then said to yourself, ‘not going to happen’! Jesus’ teaching in this section of the sermon is challenging for most people. Our natural instinct is self preservation, and that does not involve just letting someone smack you around. We are more likely to seek revenge than to passively absorb abuse.

An Eye for An Eye

With the expression “an eye for an eye”, Jesus is referring to several Old Testament passages. Exodus 21:23-25, Leviticus 24:19-20, and Deuteronomy 19:21 all include this admonition, along with other related instructions. But, I believe, the intent of these passages is not so much an instruction to punish evil-doers for what they have done as it is to limit the extent of the punishment that is allowed.

Our human tendency is to repay a hurt with an even bigger hurt. If you knock out my tooth, I want to knock out a bunch of your teeth. The Old Testament limited the ‘pay back’ to no more than the initial harm that was done. And that would make us even. Otherwise the one who received excessive pay back would be inclined to pay back even more. And a vicious cycle would ensue.

But Jesus here raises the bar. He doesn’t just limit the punishment that can be exacted on the one causing harm. Rather than ‘paying back’ the one causing harm, we are told to not resist them. But is this a call for passivity? Is there no place for self defense and for protecting family and others from evil doers? Let’s look first at what Jesus says in the following four verses and then readdress this question.

Do Not Resist An Evil Person

Jesus tells us not to resist an evil person. What does he mean by this? In James 4:7 and 1 Peter 5:9 we are instructed to resist the devil, so it would seem like resisting evil can, and should, be done. In Ephesians 6:10-17 we are instructed to take our stand against the devil’s schemes, putting on the armor of God. And in this passage we are told that our fight is not with people, but with evil beings in the spiritual realm. Our fight is not with an evil person. It is with the one who is controlling them.

Turning the Other Cheek

Jesus gives us four examples here that fall under this category of not resisting an evil person. The first is turning the cheek. In the culture I live in today, someone hitting me on the cheek is a physical attack. But in Jesus day it was more of an insulting action. And so we might see Jesus as saying don’t return insult with insult. Rather, let that person who is insulting you continue to do so. And this would be especially so if you are being insulted for the cause of Christ. Rather than be offended at this, we should rejoice that we have been counted worthy to suffer for him.

Giving Up Your Cloak

Like the previous instruction, understanding this one requires an understanding of the culture. The poor generally had very little in the way of possessions with their clothing being among the most valuable, and maybe only the clothes they were wearing. The outer cloak, or coat, was the most valuable since it also served as a blanket at night (Ex. 22:25-27). Under Jewish law a person’s outer garment could not be permanently taken away. But Jesus tells us to be willing to give it up.

In the Roman world a soldier could enlist the help of a local resident to help him carry his gear, although only for a limited distance. But Jesus told his hearers to be willing to go well beyond what was required of them. Carry his gear, not just for one mile, but for two. And surely Jesus was not being legalistic in specifying two miles. Be willing to carry it as far as needed. Don’t give just the bare minimum, but be generous with those who are demanding your time and effort.

Give To the One Who Asks

Beggars were a common sight in Jesus world, just like they are today. And helping them out was built into the Old Testament Law. In Deuteronomy 15:11 the people were instructed to be generous with their fellow Israelites who were poor and needy. Jesus does not change this expectation, but he does emphasize it. Be generous with the poor and be willing to give what you have.

This always raises the question about giving to beggars today. Many of them could work, but choose not to. And many will take what we give them and use it for drugs or alcohol. Giving to them would seem to do little beyond supporting bad habits that are killing them and/or reinforcing their chosen lifestyles. Indeed, giving to beggars on the street today is challenging and should be done wisely. You may choose to give instead to those organizations that are providing food and shelter for the homeless. Or in some other way ensure that what you give is not being abused.

So is this a call to passively let other people walk all over you. Or does it prevent me from defending myself and others? I think the answer to both of these is no. It is hard to picture Jesus and the Apostles as meek and mild, being doormats. These were strong men who called for justice and boldly proclaimed the kingdom of God. And it is hard to picture one of them standing by and watching someone be attacked without helping out.

It seems that what Jesus is talking about is not feeling like you have to correct every wrong done to you. If you can avoid a beating then do so (Acts 22:25). But don’t trade insults with people. Don’t engage in litigation with other people. Go beyond what’s expected of you. And be generous with the poor. Jesus seems to include all of that under the heading of not resisting an evil person. But it is true even for those we do not see as evil. They are generally guidelines for interacting with other people.