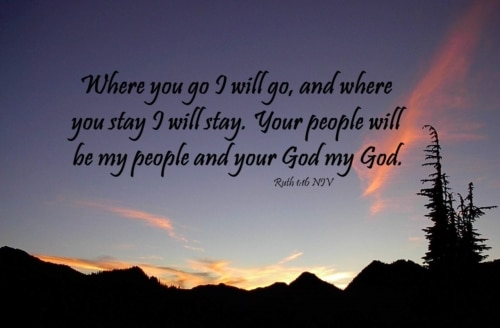 But Ruth replied, “Don’t urge me to leave you or to turn back from you. Where you go I will go, and where you stay I will stay. Your people will be my people and your God my God. Where you die I will die, and there I will be buried. May the LORD deal with me, be it ever so severely, if even death separates you and me.”

This is likely the most quoted passage from the story of Ruth. Ruth is a love story. Not in the tradition sense of boy meets girl, they fall in love, and live happily ever after. The story of Ruth starts with tragedy. Naomi and her family leave their home because of a famine in the land. They move to a foreign country where her sons marry local women. Then her husband and sons die. Naomi is left destitute in a foreign land with two daughter-in-laws.

Eventually Naomi determined to go home and encouraged her daughter-in-laws to stay behind and create new families for themselves. And this is where the story takes a turn from tragedy to love story. While love is not mentioned in this story, it is clear that Ruth loves her mother-in-law dearly.

Ruth’s commitment to Naomi is total. She is leaving behind her family, her people and country, and even the idols she had grown up with. She gave up everything that gave her identity in order to go with Naomi.

Your God WIll Be My God

Why did Ruth do this? Could it be that at least a part of the reason was because of what Ruth saw in Naomi? Surely there was something there that made her want to identify with the God of Naomi. Your God will be my God was not just a casual comment. It was a commitment to the YHWH and a rejection of the Moabite idols that she has grown up with. Ruth was in love with Naomi. But she seemed also to be in love with the Lord God of Israel.

Do our lives reflect God to others in such a way that they would want to make our Lord be the Lord of their own lives? If not, could it be that something is not right in my own relationship with God? Live in such a way that others will see the Lord in you and glorify him because of your life.