Home » Christianity » Bible Study » Rejoicing Is a Safeguard for the Believer – Philippians 3:1 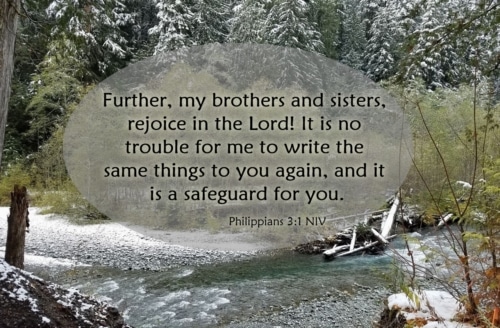 Further, my brothers and sisters, rejoice in the Lord! It is no trouble for me to write the same things to you again, and it is a safeguard for you.

Here, and at the beginning of the next chapter, Paul instructs us to rejoice in the Lord. Eight times in this short letter Paul talks about rejoicing. This was clearly something that Paul took seriously. And something that he felt was no trouble to repeat over and over.

But why was rejoicing in the Lord such a big deal? Paul explained that rejoicing in the Lord was a safeguard for those he was writing to. It was for their protection. The Philippian church, as with most first century churches, was facing opposition and persecution. Being a Christian in that day and time was not easy. It meant turning your back on the culture you had grown up in, along with the gods of that culture, your town, and your family. Others would view you with suspicion, if not outright hostility. You might be viewed as a traitor.

It would be very easy to become discouraged by all of the negative attention from the world outside your local body of believers. But there was a way to prevent that. And that was to rejoice in the Lord. Not in the troubles you are facing. But in what the Lord has done, is doing, and will do for you. Keeping our eyes fixed on him, and rejoicing in him, is a safeguard that can keep us from falling back into the world he has delivered us from. So, as Paul would say, rejoice in the Lord.