Encouraging, comforting and urging you to live lives worthy of God, who calls you into his kingdom and glory. (1 Thess. 2:12 NIV)

Home » Christianity » Theology » Doctrine of Christ » What Is the Mercy Seat? And Why Is It Important? 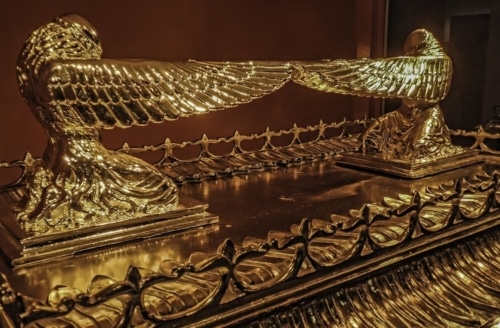 You may have heard people mention the mercy seat of God. And, depending on the translation you use, you may have seen a reference to it in the Bible. But it is not something that I find discussed much today. This article will take a look at what the Bible says about the mercy seat and why it is significant for believers today.

What Is the Mercy Seat?

The mercy seat is first introduced in Exodus 25:10-22. This is part of a larger passage that is dealing with the construction of the tabernacle and its furnishings. These thirteen verses describe what came to be known as the ark of the covenant. The first few verses describe the ark itself. The ark is a wooden box that is about 45 inches long and 27 inches wide and tall. It has legs, rings, and carrying poles, and is overlaid with gold. Contained within the ark were the stone tablets with the words of the covenant written on them.

The rest of this passage describes the cover, or lid, that was made for the ark.  The Hebrew word used for this lid was kappōret. Some Bible versions, such as the CSB, translate this word as “a mercy seat”. Others, like the NIV, translate it as “an atonement cover”. It is the same width and length as the ark, and it was made of pure gold. And on top of the mercy seat were a pair of cherubim.

After the description of the mercy seat, God told Moses that it would be the place where he would communicate with Moses, passing on his laws for Israel. This was also where the blood of the atoning sacrifice was offered. And in the description of that sacrifice, discussed below, we find that it was where God lived, at least symbolically. The mercy seat represented God’s presence among his people.

What Is the Significance of the Cherubim?

Mention cherubs (the singular of cherubim), and most people are likely to picture cute little babies with wings. But the cherubim, as described in Ezekiel, are quite different (Ez. 1:4-14). They are actually quite terrifying looking. There is nothing cute and cuddly about them.

The cherubim on the top of the mercy seat are described as facing each other. And their wings were outstretched and overshadowing the mercy seat. These cherubim are an interesting feature. One that is not explained anywhere. But from their use elsewhere, I believe we can draw some conclusions.

The first mention of cherubim in the Bible is in Genesis 3:24. After Adam and Eve were banished from the Garden of Eden, cherubim were placed on the east side of the garden, along with a flaming sword, to guard the way to the tree of life. The garden represented God’s presence on earth, and so the cherubim seem to serve as gatekeepers to God’s presence.

In 1 Samuel 4:4, and other places, God is described as being enthroned between the cherubim over the ark. Psalm 18:10 describes God as mounting the cherubim and flying. The first chapter of Ezekiel describes creatures that are later identified as cherubim. These creatures are strange indeed. But above their heads is the throne of God.

What Role Did the Mercy Seat Play in Jewish Religious Life?

The mercy seat was initially where God met with Moses to communicate the Law to him. But it had a second, more significant role in the ritual worship practice of Israel. Leviticus 16 describes the Day of Atonement, an annual time of sacrifice for Israel. And the mercy seat played a significant part in this sacrifice.

There were other sacrifices made over the course of a year, including the sin and guilt offerings. These were to be made when a person, or the community, had sinned. But these offerings seemed to be restitution for their sin. It was a penalty they had to pay for their sin. But only the sacrifices on the Day of Atonement actually made atonement for sin. Only this sacrifice would serve to wash away the stain of sin. Although, as the author of Hebrews makes clear, the blood of bulls and goats could not actually take away our sin (Heb. 10:4).

The Mercy Seat in the New Testament

The mercy seat, using the Greek word hilastērion, is mentioned twice in the New Testament. In Hebrews 9:1-9 the author described the arrangement of the furnishings of the tabernacle. And in verse five, he mentioned the mercy seat with its overshadowing cherubim of the Glory. Following that, he described the annual activity of the high priest offering the blood of the atonement sacrifices. And he closed this description with the comment that this earthly tabernacle and its offering were only temporary until the new order ushered in by Christ had come.

The rest of Hebrews 9, and on into the next chapter, describe how Christ came as a better high priest, serving in the heavenly tabernacle and offering a superior sacrifice of atonement. The author of Hebrews goes to great lengths to show that what Leviticus 16 described was only looking forward to the more perfect sacrifice that Jesus would make on our behalf. The blood of the sacrificed animals could never make atonement for our sins. But the blood of the sacrificed Jesus could. And did.

Jesus As the Mercy Seat

The second time hilastērion is used is in Romans 3:25. Here it is translated, sometimes as “mercy seat” (CSB), sometimes as “propitiation” (KJV, ESV, NASB), but other times as “sacrifice of atonement” (NIV, NRSV). But, regardless the translation, it is God who presented Christ as the means of making atonement. And this atonement is received by faith in the blood of Jesus.

I believe the translation of the CSB in this passage is very intriguing. The mercy seat in the Old Testament was God’s dwelling place among his people. And that is really a good description of Jesus as well. He was God, wrapped in human flesh, and dwelling among us; Emmanuel (Matt. 1:23). In a very real way, Jesus was the fulfillment of what the Old Testament mercy seat was pointing toward.

And not only was he the mercy seat, but as Hebrews points out, he was also the high priest that Aaron and his descendant could never be (Heb. 9:11). And he was himself a sacrifice that was superior to the animals offered by the priests under the old covenant (Heb. 9:12). Jesus fulfilled all aspects of the Old Testament sacrifice of atonement. He was the high priest, the atoning sacrifice, and the mercy seat.

In Matthew 5:17, Jesus declared that he was the fulfillment of the Law and the Prophets. We often take that to mean that Jesus fulfilled the prophecies related to a coming Messiah. But I believe it means much more than that. All the Old Testament points to Jesus and finds its ultimate meaning and fulfillment in him. And this is dramatically illustrated by the Old Testament mercy seat pointing ahead to Jesus and his atoning sacrifice.

The Cross as a Symbol

This article was first published at Bible Study Tools on October 15, 2021