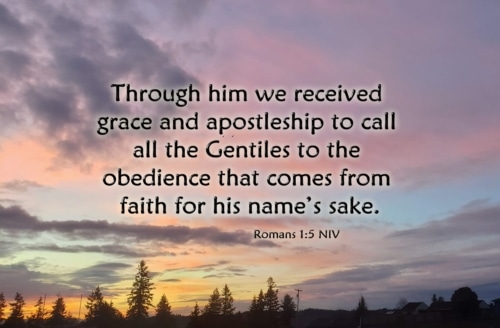 Through him we received grace and apostleship to call all the Gentiles to the obedience that comes from faith for his name’s sake.

This verse comes out of Paul’s opening introduction in his letter to the Romans. In it he expresses that he has been tasked with calling Gentiles to the obedience that comes from faith. We are all familiar with obedience. Most of the things we do require some form of obedience. For instance, how many rules are associated with driving a car? Or even going out to eat? Sometimes the rules are explicit, like following the speed limit. Other times the rules are implied, like don’t stare at fellow dinners.

Why do we obey these rules, either explicit or implicit? Generally, it is out of a sense of obligation, or a fear of the consequences. If I fail to obey, I may not be allowed to continue in that activity. I may face a fine. Or I may get my nose punched in. All to often we take this approach as believers, obeying the Bible’s instructions out of fear of the consequences of failing to do so. Or out of a sense of obligation. It is what is expected of me.

Obedience to God should not be the result of trying to improve my standing with him. Rather it should come about because of my standing. I belong to him. I am happy about that. And I want to serve.