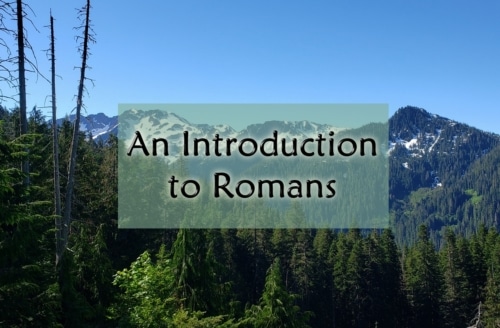 The sixth book in the New Testament is Paul’s letter to the Romans. The first four books are what we generally call gospels, or good news, because they share the life and ministry of Jesus, the Son of God who gave his life as a ransom for sinners. But this letter to the Romans also deserves to be called a gospel. Because it tells the story of sinful mankind and a God who imparts his own righteousness to them.  This letter, the longest of Paul’s writings, is the most complete exposition of what God has done for mankind. Truly good news.

This letter claims to be written by the Apostle Paul. All of the early references to this letter attribute it to Paul. And there seems to be little doubt among modern scholarship that this letter was indeed written by Paul. Paul was a well-educated Pharisee who was very zealous for the law and the traditions of his people. And a leader in the initial opposition to the spread of the Jesus movement.

But Paul had an encounter with the resurrected Jesus. And after that he became an outspoken advocate for his new Lord. He was commissioned by Jesus to take the gospel to the Gentiles. Paul is the central figure in the second half of the book of Acts. Luke tells the story of Paul’s trips around the Mediterranean and the spread of the gospel.

There is some debate as to the intended audience of this letter. Some manuscripts omit the two reference to Rome in the first chapter. And some lost manuscripts appear to omit the last two chapters of the letter.  This has led some to speculate that the letter may actually have been written to another church, such as Ephesus. Or that it was written as a general letter to be sent out to a wider audience. But most seem to accept that it was indeed written to the Roman church. And that what we have today was what Paul wrote.

Another question arising about this letter concerns who the audience was in Rome. The church there was likely originally composed of Jewish believers. But by the time Paul wrote they had likely become a predominantly Gentile church. Did he write to the church as a whole, primarily to the Gentile believers, or primarily to the Jewish believers? I have seen arguments for all three positions. And much of that argument centering around the discussion of the Jews in chapters 9-11. Is it written to Gentiles to answer their questions about where Israel sits in God’s plan. To Jews to assure them that they have not been abandoned?  Or does it do both?

I have heard no compelling argument either way. So I assume that it was written to the church as a whole. Although as the apostle to the Gentiles, it would not be surprising if he focused just a little more on the Gentile side of the house.

Most scholars date this epistle to around A.D. 56, give or take a year. This is toward the end of Paul’s third missionary journey. And likely after his long stay in Ephesus, when he was paying a short visit to Corinth. At that time he was preparing for his trip to Jerusalem to take the offering collected by the Asian church to the poor saints there.

Paul’s letter to the Romans is easily his most complete and systematic exposition of the gospel he proclaims. But why did he direct it to a church where he had had no personal involvement? Paul gives us no reason, so we can only speculate on his purpose in writing.

I have often thought that Paul’s purpose in writing may have been to impart some spiritual gift to them (Romans 1:11). Sharing with them with the gospel he would have proclaimed if he had been there in person. We do not know who was responsible for founding the church in Rome. Or what kind of leadership they had prior to this.

This church was in a central location at the heart of the Roman empire. And it was clearly one that Paul was hoping to establish a working relationship with. Maybe using them as a base of operation as he moved further west. So it would make sense that he would want them to have a good understanding of the gospel. As well as God’s purpose for humanity.  In a way, what Paul is doing here is putting into writing what he would ordinarily provide verbally to a new church he is working to establish.

It is hard to know just what rumours the Roman church have have heard concerning Paul and his teachings. So this letter could serve to alleviate any concerns they might have had in partnering with him. Making it clear that the gospel he proclaimed was God given.

Paul’s letter to the Romans has a series of major themes that build on each other: sin, righteousness, sanctification, the Jews, and practical Christianity.