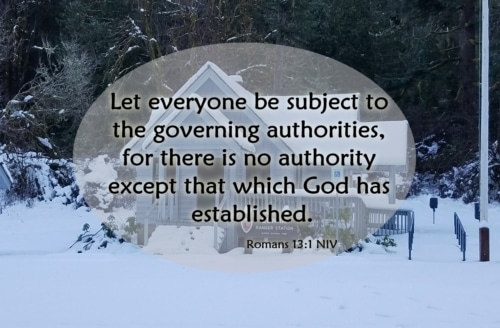 Everyone seems to have an opinion about their government, whether at the local level or a national level. Some like it and think it is doing a good job. Others think it is detrimental to our way of life. Government is either our savior, or an anchor around our necks.

As a Christian, how should I be responding to my government, whether I view it as good or as corrupt?  Paul has some instruction for us in the 13th chapter of Romans. And I believe they are very instructive, although also very challenging.

Let everyone be subject to the governing authorities, for there is no authority except that which God has established. The authorities that exist have been established by God. Consequently, whoever rebels against the authority is rebelling against what God has instituted, and those who do so will bring judgment on themselves. For rulers hold no terror for those who do right, but for those who do wrong. Do you want to be free from fear of the one in authority? Then do what is right and you will be commended. For the one in authority is God’s servant for your good. But if you do wrong, be afraid, for rulers do not bear the sword for no reason. They are God’s servants, agents of wrath to bring punishment on the wrongdoer. Therefore, it is necessary to submit to the authorities, not only because of possible punishment but also as a matter of conscience.

This is also why you pay taxes, for the authorities are God’s servants, who give their full time to governing. Give to everyone what you owe them: If you owe taxes, pay taxes; if revenue, then revenue; if respect, then respect; if honor, then honor.

The first thing to note here is that Paul does not distinguish between benign and corrupt or despotic governments. His words apply to all governments, regardless of how we view them. And he seems not to be referring to different forms of government. Rather to specific instances of governments and the men and women who are at their head.

The second thing to note is that Paul claims that all of these authorities have been established by God; no exceptions. It might be easy to swallow that a government that shows concern for all of its people was established by God. But it is a wholly other matter to think that God is responsible for Hitler, Stalin, Idi Amin, or Pol Pot. And not only are they established by God; they are called his servants. I must confess that I do not understand how this can be. And Paul gives no answer as to why God would establish such corrupt rulers. Although certainly he knew that some authorities were corrupt and godless.

Submit to the Authorities

But before getting too worked up over this, there is something important to recognize in this direction. God has established the authorities so he is a higher authority. Those he has put into place will give answer to him for what they have done as a ruling authority. And, more importantly to me, it puts some bounds on my submission to my government. If my local government establishes a law that it contrary to one at a higher level of government, then the higher law takes precedence. And since the highest authority is God, his laws will override any at a lower level that are contrary.

There are several examples of this in the Bible, where God’s people refused to submit to the direction of human government because it violated what they understood to be God’s direction. The Hebrew midwives in Exodus 1 who refused to follow Pharaoh’s order to kill all newborn Hebrew boys. Daniel and his friends who faced the lions and fiery furnace rather than worship the king or his image.  And Peter and John before the Sanhedrin, telling their rulers that they must obey God rather than men. Paul’s direction to be in submission to my government assumes that my government is not trying to play god. Nor expecting me to act contrary to God’s higher authority.

To love God with all that I am, and to love others like myself are the greatest commands of God, according to Jesus.  My government could enact laws that would result in me causing harm to another person; breaking the command to love others as myself. Or laws that would attempt to hinder my relationship with God; breaking the commandment to love God with all I am. And in those circumstances I am under no obligation to obey. And should choose to obey God instead.  At they same time I should be prepared to pay the consequences of choosing to follow God rather than man. And, like the Apostles in Acts 5, rejoice when I am counted worthy to suffer for the name of Christ.

But be sure that it is indeed God’s authority that you are following should you choose not to submit to your human government. All too often we substitute our own opinions or prejudices for the the actual teaching of the Scripture. It is easy to interpret my own feelings as being given to me by God rather than being a product of my own fallen nature. Failure to submit to my government because I don’t like what they are telling me to do is not the same thing as submitting to God as the higher authority. No matter how I might try to disguise it or rationalize it to myself or others.

In some fashion, God has placed human governing authorities over me. And I am responsible to submit to those human governments. If I rebel, then I am rebelling against God. The only exception is if that human authority attempts to override God’s authority. Failing that, it matters not if I like my human leadership or not: submit to them!

Update (10/9/2021): This was originally written over six years ago. But it seems more appropriate now than ever. As Christians, our bodies are not our own, we were bought at a price (1 Cor. 6:20). And the one who bought us tells us to be in submission to the governing authorities. And not just when we like what they tell us to do.