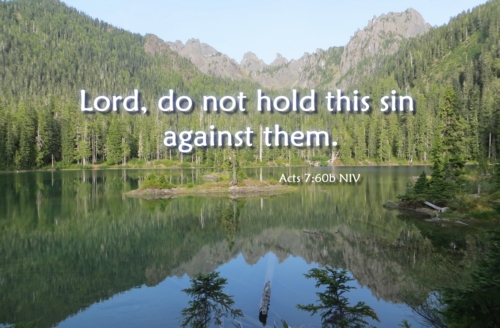 Then he fell on his knees and cried out, “Lord, do not hold this sin against them.” When he had said this, he fell asleep.

When someone wrongs me, I am instructed to forgive them. I know it is what I should do. Yet I find that it can be hard. Especially when the other person persists in that behavior. How much more difficult it must be to forgive a person who is actively causing me harm. And even more so to ask God to forgive them, not holding them accountable for what they are doing.

Yet that is what Stephen did when he was being stoned to death by an angry mob. He asks God to forgive them. To not hold them accountable for killing him. And in this he is following Jesus’ example on the cross as he prayed for God’s forgiveness toward those who put him there. Why would someone do that?

I believe that Stephen’s forgiveness of his executioners was an expression of love. He cared deeply about the condition of people’s hearts, wanting them to come to know the savior he was dying for. And he did not want anything, including his murder, to get in the way of their potential salvation. I have wondered sometimes how much of an impact this might have had on Saul, even as he sought to imprison other believers? Did Stephen’s response at his death trouble him and make him more receptive to Christ’s call? We’ll never know this side of glory. But maybe.

But what about me. If I found myself in Stephen’s place, would I seek their forgiveness? Forgiveness as an expression of love. Or would I fall short of his example?