Home » Christianity » Bible Study » Coming a Second Time for Those Who Are His – Hebrews 9:28 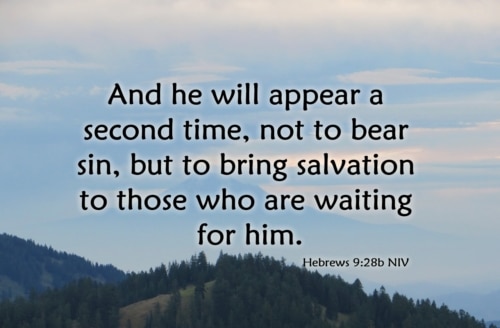 Just as people are destined to die once, and after that to face judgment, so Christ was sacrificed once to take away the sins of many; and he will appear a second time, not to bear sin, but to bring salvation to those who are waiting for him.

Jesus came to earth some 2000 years ago. God, taking on human form. Born into this world to a peasant girl. He lived among us for maybe 33 years. And then was crucified on a Roman cross. Three days later he rose up from the grave, conquering death. He sits now at the right hand of God. And his followers look for him to return some day.

And he is returning a second time. This time it is not as a sacrifice. It is not for the world. He is returning, bringing salvation, for those who are looking forward to his return. We rightly say that we have been saved. But that salvation is not complete until he returns for us, taking us to be with him forever (John 14:1-3). There are many things in life that we look forward to. But which of them are better than Christ’s return for those who are his own.