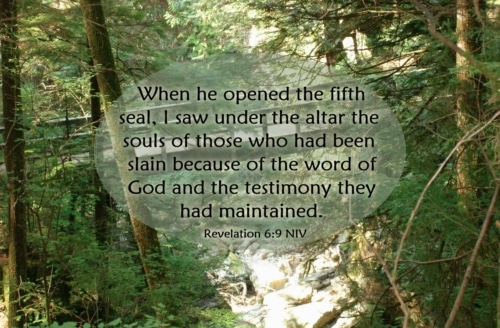 When he opened the fifth seal, I saw under the altar the souls of those who had been slain because of the word of God and the testimony they had maintained. They called out in a loud voice, “How long, Sovereign Lord, holy and true, until you judge the inhabitants of the earth and avenge our blood?” Then each of them was given a white robe, and they were told to wait a little longer, until the full number of their fellow servants, their brothers and sisters, were killed just as they had been.

As Jesus opened the seals on the scroll there first came a series of riders on horses. They seem to bring judgement on the earth and it’s inhabitants. After the four horsemen of the apocalypse the fifth seal is opened, and it seems quite different. Rather than judgement, John sees under the altar the souls of those slain for their faith. They inquire as to how much longer until the judgement is completed. And they are told to chill for a bit longer.

There are many thoughts as to what is represented here. Who are these believers? What is meant by the white robes? And why they are crying out? But what I see as significant is that these are those who were slain for their witness to Christ; Christian martyrs. Not just during a tribulational period, but throughout history. Their sacrifice on the altar is not forgotten, but is honored (the white robes) and remembered.

Suffering for our faith and martyrdom are probably not high up on the list of things we look forward to. But those who do experience martyrdom are blessed. What a privilege it would be to join this select group under the altar. Remember, and hold in honor, those who have given their lives for Christ in the past. And those who continue to offer the ultimate sacrifice today.