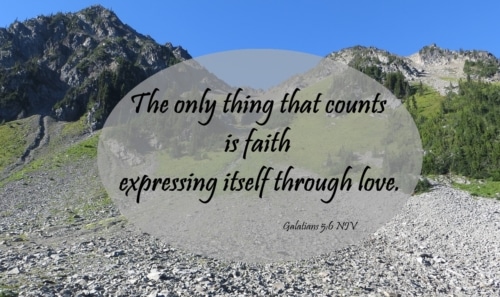 For in Christ Jesus neither circumcision nor uncircumcision has any value. The only thing that counts is faith expressing itself through love.

Circumcision is generally not a religious issue among Christians today. But in Paul’s day it was very contentious. Circumcision represented keeping the Old Testament Law, something that many Jewish Christians were very concerned about. To them, the Law remained very important, and was something that they felt every believer should follow. But Paul, although keeping the Law himself, argued against forcing the Gentile believers to observe it. The issue was one of legalism; is there anything I must do to be saved apart from faith? And Paul’s response throughout this letter to the Galatian churches is a resounding no.

But does that mean that as a believer I am free to do what I want? I don’t believe so. In the second half of this verse Paul may have had in mind the words of Jesus when he identified the greatest commandments (Matt. 22:37-39); to love God with all you are, and to love others as yourself. What Paul tells us is that what counts in not obeying the Law, it is faith that expresses itself through love; love for God and love for others. A faith that does not express itself in love is dead and worthless (Jam. 2:14-26). To be clear, I am not saved because of the expressions of love in my life. But I am saved through a faith that does make that expression. A faith that is only intellectual acknowledgement has no value. Seek for a living and active faith.