Home » Christianity » Bible Study » Blessed Is the One Whose Sin Is Forgiven – Psalm 32:1-2 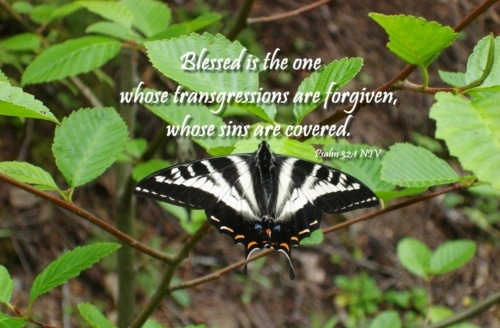 In these verses David expressed the relief that came from confessing his sin. What David had done that occasioned this psalm is unknown, and is not really important. But it weighed heavy on him. It took the joy out of him and left him groaning; feeling the heaviness of God’s hand on him.

But finally David confessed his sin to God. He did not try to justify it, or cover it up. He laid bare his soul before God and confessed his sin. I believe David here was doing more than acknowledging that he had sinned. I believe he repented of it and sought forgiveness from God. No doubt he also dealt with any who had been hurt by his sin. And when David had done that, God forgave him. And these first two verses of the psalm are a reflection of the blessedness that comes to one whose sin is forgiven.

Acknowledging our sin before God can be hard. It means admitting failure. Going beyond mere acknowledgement, and repenting of what you have done is even harder. It involves a turning away from what you have done; something that you might find pleasure in. But David’s experience, and that of countless others, is that the restoration of a right relationship with God is better than any pleasure this world has to offer.