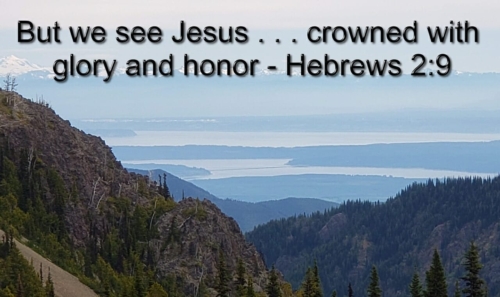 It is not to angels that he has subjected the world to come, about which we are speaking. But there is a place where someone has testified:
“What is mankind that you are mindful of them,
a son of man that you care for him?
You made them a little lower than the angels;
you crowned them with glory and honor
and put everything under their feet.”
In putting everything under them, God left nothing that is not subject to them. Yet at present we do not see everything subject to them. But we do see Jesus, who was made lower than the angels for a little while, now crowned with glory and honor because he suffered death, so that by the grace of God he might taste death for everyone.

The pastor started off his ‘sermon’ with an exultation of Christ. That he is high above the angels who are only ministering servants sent to serve those who will inherit salvation. In this passage, and through the rest of this chapter, the pastor changes his perspective. Now, rather than looking at the divinity of Christ, he looks at his humanity.

The World To Come

This short passage starts with a reference to the world to come. “It is not to angels that he has subjected the world to come, about which we are speaking.” What is this ‘future’ world that he is speaking about?

Hebrews 1:10-12 would seem to allude to this world to come. That passage is talking about the eternality of God, comparing it with the temporary nature of this present creation. This present creation that will perish and be changed.

Hebrews 1:14 is more explicit. Angels are sent to minister to those who will inherit salvation. The author of Hebrews looks at salvation here from a future perspective. It is something that we are looking forward to. And as he goes on in Hebrews 2:3-4, he references a salvation that was first announced by the Lord and validated by the signs that God performed.

This future world is our ultimate salvation. It is deliverance from this temporary life in the flesh and into the eternal presence of God. This world was foreshadowed by the garden in Genesis 2. And we find it foretold in Revelation 21-22. Between these bookends is the life that we live here in the flesh.

It must have been tempting for the pastor’s Jewish audience to exalt angels as powerful and holy creatures who serve God. But the pastor points out here that this future world of salvation is not for the angels. They are not the fulfillment of God’s purpose in creation.

The eighth psalm is one of praise to God for what he has done. In particular for God’s creation. And in it David expresses wonder over man’s place within the creation. In the psalm, David marvels that God has made man a little lower than the angels, crowned him with glory, and make him ruler over all other living things.

I believe this psalm looks back to Genesis 1:26-28 and God’s creation of humanity. In that creation, God commissioned humanity to rule over all of the other living creatures on the earth. I believe that David, when he wrote this psalm, surely had in mind the privilege and exalted position that God had given to humanity. But, like many other Old Testament passages, the New Testament author sees hints of the coming messiah.

I think of particular significance to Hebrews is the mention of angels in this psalm. Mankind was made lower than the angels. This is in contrast to the relationship between Christ and the angels described in the first chapter. There you see Christ exalted high above the angels.

Almost Everything Under Our Feet

What is missing; what is not subject to man? Death! Death does not submit to the authority of humanity. In the end, it takes us all. So the submission of the created order to man is not yet full and complete.

But, We See Jesus

I think this is the key part of these five verses. We have a humanity that was given authority, but has not yet fully attained that authority. Things are incomplete. But! The author does not leave us with the picture of a creation not fully submitted.

On one hand we see a creation not in submission. But, on the other hand, we see Jesus. Jesus, who, for a time, was made lower than the angels. The pastor here points us back to Psalm 8 and the place of humanity. That one who was exalted high above the angels became one of us in order to do for us what we could not do ourselves.

Crowned With Glory and Honor

It is because Jesus suffered death that he is now glorified and exalted. There are two ways to look at the cross and Jesus’ crucifixion. The world looks at it as the tragic end to a life. From that perspective, the cross represents defeat.

But the Bible, and Hebrews in particular, tells us quite a different story. Jesus was crowned because he suffered. Far from being a tragic end to his life, the cross was Jesus’ victory over sin and death. The cross was Jesus’ coronation. When Jesus was lifted up onto the cross, he ascended to his throne in heaven. He defeated his enemies and began his reign over his kingdom.

Tasting Death for Everyone

In Jesus’ death he tasted death for all of us so that we would not have to. Death is that final enemy that has not submitted to humanity. But Jesus death fixed that. He brought death into submission. Death is no longer to be feared. Even though we still face death while in physical bodies, death now is only an entrance into eternity future.

But, who has he tasted death for? This passages says that he tasted it for everyone. ‘Everyone’ here is a word that is all inclusive. It literally means everyone or everything, all, or whole. In order to limit the scope of Jesus’ atoning death in this passage you would need to read something into it beyond that the author actually says. Jesus tasted death for every single person in the world.

But does that equate to universalism; that all people will ultimately be saved? I do not believe so. On January 1, 1863, Abraham Lincoln issued the Emancipation Proclamation, declaring all slaves in the United States to be free. A war had to be fought and won before this become a reality. But that war did come to an end and freedom was granted to the slaves. But did all the slaves become free? No, there were those who choose to remain in slavery. The war was fought for them, but in the end it had no impact on their lives.

In the same way, Jesus experienced death for all. But many choose not to accept the liberty that Jesus dies to procure for them.