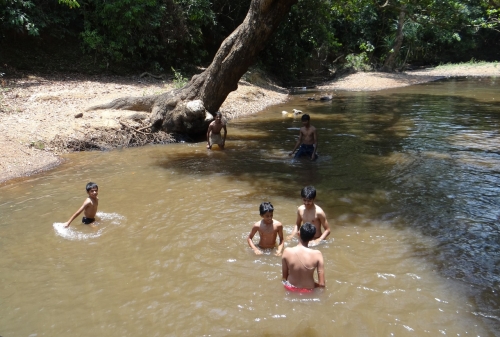 Naaman’s servants went to him and said, “My father, if the prophet had told you to do some great thing, would you not have done it? How much more, then, when he tells you, ‘Wash and be cleansed’!” So he went down and dipped himself in the Jordan seven times, as the man of God had told him, and his flesh was restored and became clean like that of a young boy.

Naaman was a powerful man over a foreign army. Life was good for him, except for one thing. He had leprosy. So Naaman came to Elisha, the prophet in Israel, hoping that he would heal him. He brought rich gifts as a reward and certainly expected to be treated in accordance with his position. But Elisha declined to appear before him and instead sent a message by a servant. The message was simple; go and wash in the Jordan River seven times.

Naaman was greatly offended by his treatment and the proposed cure. He felt that it was beneath him to wash in the muddy Jordan instead of the clean rivers of his home. But his servants appealed to him saying, if the prophet had told you to do some great thing, would you not have done it?” So why not at least try this little thing. So Naaman washed, and came out of the Jordan cleansed of his leprosy.

I wonder how often God calls on me to wash in the muddy Jordan to be cleansed. Something that is beneath me. Or that I find to be insignificant or offensive. Instead I wait for some more important task. A task that may never come because I was faithless earlier and missed out on the blessing of serving in the little things.