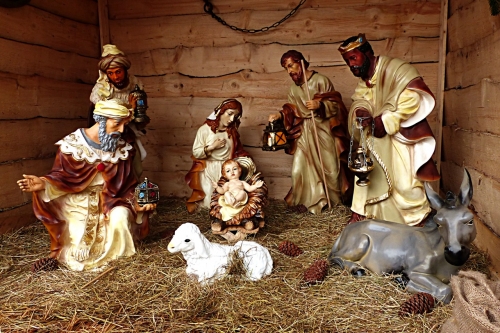 As I write this it just a couple of weeks before Christmas. We have put out our Christmas decorations in the yard and the living room. Included in these decorations are 8-10 manger scenes of various sizes and complexity. And I don’t think I am alone in this. While I have not personally conducted a survey of friends and family, I suspect that the manger scene is one of the most prominent symbols of Christmas for many Christians. But I wonder how much we consider just what that manger scene was on that first Christmas when Jesus was born? I would encourage you to take time this Christmas to remember the manger and what it represents.

While they were there, the time came for the baby to be born, and she gave birth to her firstborn, a son. She wrapped him in cloths and placed him in a manger, because there was no guest room available for them.

It was not a clean and sterile environment. It was, after all, a feed trough for animals. They were in what amounted to a barn, probably occupied by sheep and cows, along with all that comes with barnyard animals.

Mary and Joseph were, for all practical purposes, homeless. Two of a multitude who had been displaced for the purposes of the Roman census / tax. The available lodging in Bethlehem for strangers was non-existent. The manger was not their first choice as a cradle for their newly born son. But no doubt they were thankful to have even that.

Caring for the Down and Out

God could have chosen any couple, having any social and economic standing that he wanted to. And he choose Mary and Joseph, essentially nameless faces in the crowd of humanity living in Palestine. And the Son of God could have been born having the best care available rather than a dirty barnyard and manger. But he didn’t. From the very beginning of his life on earth Jesus identified with the lowly and outcast. And that continued throughout his time on earth.

What better way to honor Jesus’ birth this year than to follow his example. Remember the manger. Take thought this Christmas for those who have less than you. Reach out and be Jesus to those in need around you. What you do for those in need is actually done for Jesus (Matt. 25:40).