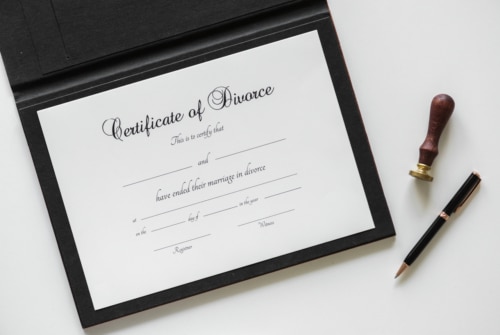 This is a topic that in American culture has become very controversial. And there are many who seek to downplay what Jesus says here, or to disregard it entirely as just another ancient practice not relevant to us today. But I believe that as a part of God’s inspired word that we need to take it seriously. The culture of that day was different than ours today. And it is true that cultural differences makes a difference in the way we understand Scripture. But, at the end of the day, Jesus seems pretty explicitly opposed to divorce.

Giving a Certificate of Divorce

Jesus would seem to be referring back to Deuteronomy 24:1-4 when he refers to giving a certificate of divorce. That passage refers to a man giving his wife a certificate of divorce because he finds something indecent, or displeasing, about her. The passage is actually a prohibition against a couple remarrying if there has been an intervening marriage. That remarriage is described as being detestable to God.

It is important to note here that giving a certificate of divorce is not a part of the Law. Rather, this passage is referring to something that seemed to be a part of their cultural practice that God neither affirms or condemns here. This same passage comes up again later in Matthew 19:2-9. And in this passage Jesus said that this practice of divorce was not God’s will, but instead was something he allowed because of the hardness of the people’s heart.

The Only Grounds for Divorce

In both Matthew passages that have been referred to here Jesus does give an acceptable motive for divorce. And that is infidelity within the marriage. When one partner commits adultery, the other partner is justified in terminating the relationship. Although, in reality, it is the partner committing adultery who is breaking the marriage covenant. The offended partner, in seeking a divorce, is simply formalizing the dissolution of the marriage.

But, note that Jesus does not command that infidelity result in divorce. Rather he allows it. I believe he would prefer that the two work together to preserve, or re-establish, their marriage. But that may not be possible, especially if the infidelity is ongoing.

What about a spouse who finds themselves in an abusive or otherwise dangerous relationship? Are they obligated to remain in that marriage? Or can they escape from it? I do not find much in the Scripture that directly answers that question. But I do find it hard to counsel someone in that position to simply remain and bear up under it. In remaining, that abused spouse might have a positive influence that would be lost were they to leave. But if the environment becomes so toxic that one’s life or health is at risk, I believe that leaving is justified. But those are my thoughts, not that of the Bible.

The conclusion of this short passage is challenging. A person who marries a divorced person is guilty of adultery. But adultery is sexual relations that involve a married person and someone who is not their spouse. The only way I can make sense of this is to see that, in God’s eyes, that divorced person is still married. And so, when they marry a second time, they are being unfaithful to their original marriage vows.

Many people I know today have remarried after a divorce. And many of them are godly believers who are faithfully serving our Lord. Are they guilty of adultery on an ongoing basis? On the surface, at least, it would appear to be what Jesus is saying. But I do not believe that Jesus was legalistic in that sense. He knows us, loves us, and uses us where we are. I do believe he blesses godly marriages, even if they resulted from a failed earlier marriage.

It seems to me that what Jesus is stressing here is that marriage is a serious relationship. It is not to be entered lightly, like so much of our culture does today. Try it out and see if it works. If not, no big deal. Just get a divorce and try again. As believers we should enter into a three way partnership with our spouse and with God. Letting nothing come between either of those partnerships.

Other Posts in the Sermon on the Mount