Home » Christianity » Theology » Doctrine of Christ » The Supremacy of the Son of God – Colossians 1:15-20 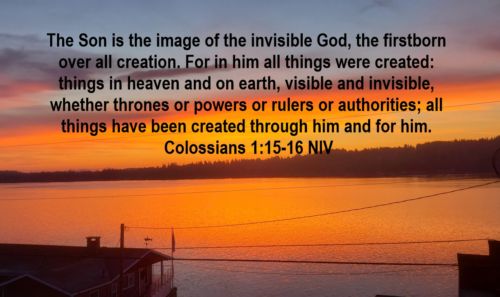 The Son is the image of the invisible God, the firstborn over all creation. For in him all things were created: things in heaven and on earth, visible and invisible, whether thrones or powers or rulers or authorities; all things have been created through him and for him. He is before all things, and in him all things hold together. And he is the head of the body, the church; he is the beginning and the firstborn from among the dead, so that in everything he might have the supremacy. For God was pleased to have all his fullness dwell in him, and through him to reconcile to himself all things, whether things on earth or things in heaven, by making peace through his blood, shed on the cross.

Who is Jesus? There are many answers that Christians can give to this question. The incarnate Son of God. Our savior and redeemer. He is fully God and fully man. The second person of the Trinity. And all of these answers are correct. But Paul, seeking to establish the imminence of Jesus, goes into much greater detail concerning his nature and work in this passage. His goal is to establish the supremacy of Christ, the Son of God, over against all other contenders.

The Image of the Invisible God

This expression seems to harken back to Genesis 1:26 and God’s creation of humanity. In that passage, God created humanity in his own image and gave him authority over the rest of the creation. But humanity failed in their mandate and rebelled against their creator. The image of God, humanity, was tarnished by sin.

The remainder of the Old Testament is the story of God’s redemptive purpose. A story that comes to a climax with Jesus who is also identified as the image of God. And what the first humanity failed to do, living in obedience to God, the second humanity did. Jesus was that new humanity. And all who are ‘in Christ‘ are a part of that new humanity.

In addition to the new humanity ushered in by Christ, there is a new creation. While that term is not explicitly used in this passage, Jesus is identified as the firstborn of the dead. And his work was one of reconciliation, renewing the relationship with God. Creation itself is being remade for and through the new image of God.

The Firstborn Over All Creation

Jesus is also identified as the firstborn over creation. There are some who take this to mean that Jesus was the first creation of God. And that he in turn was responsible for the rest of the creation. That is the position of the ancient heresy of Arianism and modern day Jehovah’s Witnesses. But this term ‘firstborn’ means more than what I express by saying by son is my firstborn. When I use it that way I am referring to someone who has come into existence and was the first of his siblings.

In the Scripture, firstborn is also used of a place of honor or superiority. In Exodus 4:22, Israel is identified as God’s firstborn son. Israel had indeed come into existence. But that is not what God is expressing here. Instead, he is telling Pharaoh that Israel has an exalted status with God. Among all the peoples on earth, Israel has God’s favor and blessing.

And that is how this expression is used here. Firstborn signifies that Christ is over all. His is the highest place in heaven and on earth. He is over all of creation. Nothing in the creation is superior to Christ.

Creator of All Things

Jesus is not just the firstborn over creation. He is also the agent of creation. Some translations render the beginning of verse 16 as “For by him all things were created“, but apparently “For in him all things were created” is a better rendering. All of creation came about, not by Christ, but in Christ. The end of this verse expresses the idea of agency better when it says that “all things have been created through him“.

Being the agent of creation takes nothing away from what the preincarnate Jesus did. But it does leave room for the working of the Father and the Spirit as well. Creation was the work of the entire Godhead, the Trinity. Trying to distinguish the specific activity of each of the three is a task beyond me. But it does seem that all are involved.

The creation here includes more than just the physical world we see. It also includes the invisible world of the spirit. This obviously does not include God himself. But it does include the other beings that inhabit the spiritual realm. That is a realm that we know little about. The Scripture talks about angels (Gen. 28:12), archangels (Jude 1:9), seraphim (Is. 6:2,6), and cherubim (Ezek. 10). And here Paul mentions thrones, powers, rulers, and authorities. Just what each of these is and their relationship to each other and to God is a mystery left unsolved by the Scripture. That the former four are engaged in the work of God is clear. The role of the latter is unclear, although they do seem opposed to the will of God (Eph. 6:12). But, all of them were created through the agency of the Son.

The Son is said to be before all things. This can refer to his priority in time as well as in rank. In time, Jesus preceded all of the created order. And that makes sense if he is the creator of all things.

In rank, it places Jesus above all of the created order. This includes things in both the visible and invisible worlds. Things in heaven and earth. As well as the thrones, powers, rulers, and authorities. Based on what follows in this letter I would suspect that this is what Paul had in mind. He is countering the false philosophies that are being proclaimed. And that may well include some system of heavenly court of which Jesus is but a part. If that is the case, Paul is giving an emphatic declaration that there is no competition to Jesus as the supreme authority in their lives.

All Things Hold Together In the Son

I find this to be a very interesting attribute attributed to the Son. Modern science would attribute the nuclear forces, along with electromagnetism and gravity with holding everything together. And they do. But Paul asserts that they only do so at the bidding of the Son.

The created universe seems so big and permanent to us. But at any time, should the Son withdrawn his power, the universe would simply cease to exist. That does not in any way say that the universe we inhabit is an illusion. But it does speak to its ongoing dependence on its creator.

The Head of the Body

Firstborn from the Dead

Supremacy in All Things

This would seem to be the main point that Paul has been driving toward in this passage. Other people may advance their philosophies and other spiritual forces that have power and authority. But none of them are superior to the Son. If, like the Colossian believers, they were a part of the body whose head was the Son, then they are already connected to the best. No other philosophy should be attractive, drawing them away from wholehearted devotion to the Son.

If there is still any question about the supremacy of the Son, Paul seeks to put it to rest here. All the fullness of God dwells within the Son. Paul essentially repeats this in Colossians 2:9 saying, “For in Christ all the fullness of the Deity lives in bodily form.” One of the challenging doctrines of Christianity is the dual nature of Jesus, fully God and full man. These two passages do much to affirm this doctrine.

Jesus is not a man who God has set apart for special use like he did Moses or the prophets. Nor is Jesus a created spirit who animates human flesh to lead us to God. Instead, all of God’s fullness, or his being, is dwelling in Christ. Dwelling is used to define where you live. In Matthew 4:13 Jesus moved from Nazareth and lived in Capernaum. In the same way that Jesus lived in Capernaum, God lived in Jesus. Not a part of God, but all of him.

Later, in Colossians 2:10, Paul says that “in Christ you have been brought to fullness.” The fullness of God that fills the Son, also fills those who are in the Son. Because of who the Son is, we can experience the fullness of God.

God is reconciling all things, both in heaven and in earth, to himself. There are some challenges associated this expression. Is God reconciling the fallen spiritual beings back to himself? Is God reconciling all of fallen humanity back to himself? This passage, by itself, would seem to imply that. Yet the bulk of the Scripture indicates that not all of humanity will be reconciled. Nor is there any indication of there being any reconciliation between God and the fallen spirituals beings.

It seems best to understand this as a potential reconciliation. God, in sending his Son as a sacrifice, made reconciliation possible. And all who turn to him will experience this reconciliation. Peace is restored in the new creation by the blood of Jesus, shed on the cross.

The Supremacy of the Son

In this passage Paul seems to be trying to cut the ground out from under any contender to Jesus as the ultimate expression of God in our world. In everything the Son has the supremacy. And in him alone we have reconciliation with God. There is no other way to the Father except through the Son.