Home » Christianity » Theology » Was There Death in the World Before the Fall? 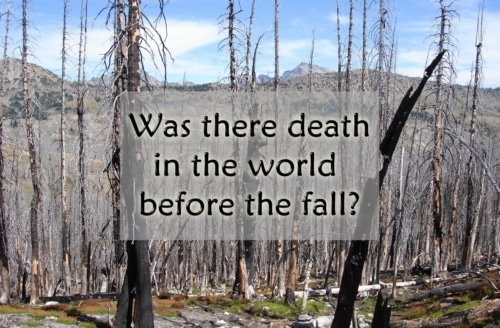 The first couple of chapters of Genesis picture the world God created. A world that he pronounced as being ‘very good’. But then, in chapter 3, Adam and Eve ate the forbidden fruit followed by death’s entrance into the world. But was this death that came with eating from the Tree of Knowledge of Good and Evil physical or spiritual? And did it only impact Adam and Eve and their progeny? Or did it impact all life on the earth?

Before attempting an answer to this question, I think it is important to identify some key assumptions that I make.

There are two contrasting views about the creation that impact how we view the origin of death. There are many variations on these, but I believe these simplified models help to explain the position of most people concerning the relationship of death and the fall.

The first view is one that is held by many in the evangelical community. It is that the creation occurred on the order of a few thousand years ago. Most holding this view also hold that there was no death in the world prior to the Fall. But that, as a result of man’s fall, all of creation was impacted, including the intrusion of death as the fate of all living things.

The second view is that the creation occurred on the order of billions of years ago. This view is held by some in the evangelical community as well as most of the rest of Christianity and nearly all of secular science. This position holds that as long as life has existed on earth, it has been accompanied by death.

When we talk about death, a valid consideration is defining the scope of death. Some who might deny the death of humanity before the Fall, might accept the death of lessor creatures. The death of a plant, a bacterium, or an insect might be quite acceptable. While the death of a sentient creature, especially humans, would not be.

For the purposes of this article I am referring to the death of sentient life. And that would include death as a natural outcome for Adam and Eve apart from the Fall. So, the question becomes, was there death among animals before the Fall? And would Adam and Eve, along with all animals, eventually have died if humanity had not fallen?

The Witness of Scripture

There are a handful of passages in the Scripture that speak to the issue of death in the world. Space does not allow for a through examination of them. But it is important to take them into account when examining this topic.

The first of these passages is from Genesis 1:31. When God looks at all his work in creation, he pronounces it as very good. If physical death is viewed as something that is bad, and it was in existence from the beginning, then it is hard to see the creation as being ‘very good’.

A second passage is Genesis 2:17. God gave Adam the freedom to eat from any tree in the garden. Except the Tree of the Knowledge of Good and Evil. Adam is told that when he eats from this tree he will certainly die. This would seem to imply that if Adam did not eat from it, he would not experience death.

Paul refers to Adam’s sin and its consequences in Romans 5:12-17. Paul says that sin and death entered the world through Adam. And that all die because all sin. But life comes to all who believe in Christ.

A final passage is in Romans 8:20-21. In this passage Paul says that the whole creation was subjected to frustration. This was done in hope that the creation itself would be set free from its bondage to decay and brought into the glorious freedom of the children of God. Many see this as referring to the created order being directly impacted by Adam’s fall. Including the introduction of death.

The Witness of Science

Many believers view the scientific endeavor with skepticism, believing that it is at heart an attempt to discredit faith in God. And it must be admitted that there are some who mix a philosophical bias against belief in God with their science. But science, at its heart, is simply the attempt to gain understanding in how the creation functions. It seeks to understand how our world works. As a believer, I view science as an aid to understand the glories of creation and its creator.

But science paints a very different picture of death from what some see in the pages of Scripture. Science affirms that the earth we live on is very old, and that life has been in existence on it for over 3 billion years. Much longer than humans have existed. And death has been a part of that from the beginning.

Was There Death Before the Fall?

Before the Fall, did animals grow old and die? Or did lions eat zebras? If Adam and Eve, as well as their progeny, had not sinned, would they be living on earth today, along with every animal and person who has ever been born?

The first thing to note is that nowhere in the Bible is the claim ever made that there was no death prior to the Fall. Adam is told that he would die if he ate the forbidden fruit. But that is quite different than claiming that all life would end in death if he ate.

The Goodness of Death

Maybe the biggest objection to death before the Fall has to do with the goodness of death. Can a world that includes death be rightly called ‘very good’ by God? Humans generally fear death. And we identify it as an evil that will eventually come to us all. We might imagine a perfect world as being one without death. A world where we would mature to some perfect state and never grow old.

But is death evil? At least for the one who walks with God? Does not death usher us into God’s presence? While it is true that Adam and Eve walked with God in the garden, it would seem like the hope we have is something that is beyond their experience there in the garden.

And, is there anything wrong with a lion killing and eating a zebra? What if there was no death and every creature was an herbivore? How long would it take before the world was overrun with animals eating every plant in sight? In reality, predators are necessary in order to maintain healthy and stable populations of all kinds of life. Death is really an essential component in a healthy world. A world that is “very good”.

No Reason to Exclude Death

I do not believe there is any reason to hold to a creation where physical death did not exist prior to humanities fall in the garden. From an old earth perspective, there is really no question about death before the Fall. There is no way to escape it.

But even from a young earth perspective, there is no reason to deny that death was originally a part of the creation. The Bible does not demand a deathless creation. Nor would a growing population of animals be healthy for long without death to maintain a balance.

This article was originally published at Bible Study Tools on July 17, 2020

2 thoughts on “Was There Death in the World Before the Fall?”