Home » Christianity » Theology » Why Are There So Many Christian Denominations Today? 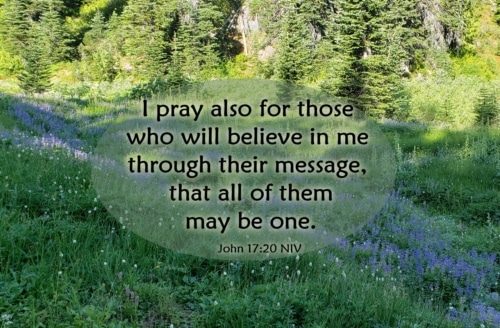 “My prayer is not for them alone. I pray also for those who will believe in me through their message, that all of them may be one, Father, just as you are in me and I am in you. May they also be in us so that the world may believe that you have sent me. I have given them the glory that you gave me, that they may be one as we are one— I in them and you in me—so that they may be brought to complete unity. Then the world will know that you sent me and have loved them even as you have loved me.

In this prayer of Jesus just before his crucifixion, he prayed that his followers would be one. That they would be in complete unity. But when we look around today it is obvious that Christianity is not a unified faith. The latest Handbook of the Denominations lists over 200 major denominations in the United States. And estimates are that there are thousands of denominations worldwide. Why are there so many different denominational groupings of Christianity today instead of the unified body Jesus prayed for?

It is doubtful that the church has ever really been unified once it spread beyond the region around Jerusalem. Even within the New Testament you find differences arising. This division was particularly evident between the Jewish and Gentile churches. The key issue was over the role of circumcision and the Law within the church. And, while they reached some measure of accord on this issue, it is apparent that not everyone was in agreement.

There were a number of heresies that divided the church for a time. But the first major breech in unity of the church occurred between the western and eastern branches. This breach became official in 1054 when the Roman Catholic Church and the Eastern Orthodox Church split. The cause of the split was at one level over doctrinal issues. But it was also a political issue over who was the head of the global church. The leaders of both sides claimed that authority.

The next significant split occurred with the Protest Reformation, starting in 1517. A significant reason for this split concerned the source of authority in the Christian life. The Roman Church claimed that authority existed within the church hierarchy. The reformers, on the other hand, claimed that authority existed in the Bible. And that contributed to a profusion of denominations as different groups came to different understandings of what the Bible taught.

By no means am I an expert on divisions within the church. But there are some very clear and obvious reasons, some of which have been alluded to above.

It is unfortunate that so often we seem unable to get along within the body of Christ. What is evident within local churches is even more pronounced in larger organizations of churches. While it is an oversimplification of the issue, a significant contribution to the split of the church into eastern and western branches was over authority. The Bishops of Rome and Constantinople both claimed to be the head of the church. Neither would back down from their prideful claim. And so what should have been a minor doctrinal issue led to a break in their fellowship.

It is not possible to know how many splits have occurred for similar reasons. But human disagreements are very real. Christ taught that greatness within his church would be based on service. Unfortunately all too often it is found in the desire for, and the exercise of, authority.

The Bible is not as straight forward as we might hope it to be. It contains many things that are difficult to understand. And that results in different people and groups developing their own distinct doctrines. Sometimes they successfully coexist together. But often they separate into distinct denominational groupings.

I do find the diverging understanding of Scripture to be understandable. I have experienced that in my own life. There are a number of things I believed 30, 40, or 50 years ago that I no longer do. I grew up within a specific denomination. And I held pretty much to their specific understanding of biblical doctrines. But in the decades since then I have come to understand some of Scripture in a different way. I am not necessarily right and my denomination wrong. But we have come to have some significant differences.

A significant reason for the proliferation of denominations within the Protestant branch of the Church is due to these differences. Not even the early reformers were in total agreement on doctrine. Luther and Calvin disagree on some things. And as a result their followers formed two distinct churches. Other reformers and later theologians also formed new churches based on their doctrinal distinctives. And each of those churches have continued to divide over the ensuing years.

There are several other reasons for the increase in denominations. Reasons that do not include conflict or differing doctrinal stances. People have different personalities. I am generally quiet and reflective. A church that is very upbeat and energetic is uncomfortable for me. Even if I have no issue with what they believe.

Culture can also have an impact on creating new denominations. Our culture is generally reflected in the way we worship and organize. Churches may be identical in belief and able to cooperate well. But if they come from different cultural settings they will most closely associate with churches of their own culture. And, as a result, forming distinctive denominations. Traditions can play the same role as culture. Some prefer a ‘high church’ form of worship while others prefer a more informal and relaxed approach to worship.

None of these reasons are really negative. They are simply a reflection that we are different people groups. And different denominations can allow affiliated churches to function and serve in a way that best meets the needs of the people they are trying to minister to.

Is There Any Hope?

Is there any hope that we might see a reverse in the number of denominations. That we might be more united at some time in the future than we are today? I am not overly optimistic about that happening. Some of the divisions are too great and would require compromise that is unacceptable.

There are denominations today that have compromised with the culture. A culture that is becoming more and more secular. At the same time there are denominations that continue to focus on obedience to the gospel and the Bible’s call for personal holiness. There is little chance that denominations who hold to either of those positions would be able to find a common ground. And, personally, I believe it best that they continue separately.

Healing rifts caused by conflict or power struggles will be difficult. The feelings often run deep and last for a long time. The rift between the Roman and Orthodox churches is a case in point.

It is also unlikely that we will ever come to full agreement on some of the doctrinal disagreements that we have. Some of these disagreements are significant and would make close fellowship very challenging.

We are divided today in a myriad number of distinct denominations. Divisions because we don’t get along. Or because we have doctrinal disagreements. Or even because we are reaching different groups of people. This side of Christ’s return, I do not see much chance that those differences will be reconciled.

But, Christ is returning for his church. A church that is made up of his followers scattered throughout all of these different denominational churches. And when that happens, he will lead his church to be one unified body. A church having one Lord, with the same love, spirit, and mind (Phil. 2:2).