Home » Christianity » Theology » Where Was Jesus During the 3 Days Before His Resurrection? 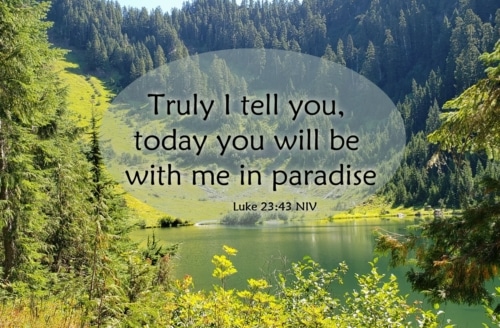 On a Friday evening Jesus gave up his life and was placed into a grave. Then, early on the following Sunday morning, his body was resurrected, and he came out of the tomb. But where was Jesus’ spirit during the time that his body was in the tomb?

Scripture does not do much to answer that question. But it does give us a few clues. This article will look at two of those ‘clues’ as well as thoughts from another ancient source.

All four of the gospels record the crucifixion of Jesus. The three synoptic gospels record that there were two others who were crucified with Jesus that day. But Luke gave us a detail that is missing from the other accounts. One of the thieves crucified with Jesus seemed to recognize who Jesus was and prayed that Jesus would remember him when he came into his kingdom (Lk. 23:40-42).

In response, Jesus told him “Truly I tell you, today you will be with me in paradise” (Lk. 23:43). The word translated as paradise in this passage has a base meaning of garden and was used by the Septuagint writers for the Garden of Eden in Genesis 2:8. According to the IVP Bible Background Commentary, the Jews of Jesus’ day contrasted Paradise with Gehenna. Paradise was the abode of the righteous when they died, as contrasted with Gehenna, the abode of the wicked.

Jesus’ promise to the repentant thief on the cross, then, was that they would both be together in Paradise. Not at some time in the future, but that very day. As believers, we look forward to the resurrection and transformation of our bodies. But that resurrection is still in the future, awaiting Jesus’ return. So, Paradise would seem to refer to that time between our death and resurrection. It is not our final home. But it is a glorious place where we await the resurrection of our bodies and being reunited with them.

This passage tells us that during the time between Jesus’ death and resurrection he was in Paradise. That place where all believers will wait, with Jesus (2. Cor. 5:8), until the end of the age and our being gathered to him.

Preaching to the Spirits in Prison

There is a second passage in the Scripture that many believe has something to say about this question. In 1 Peter 3:18-22 Peter talks about Jesus’ crucifixion, resurrection, and ascension into heaven. There is a part of this passage that is challenging to understand and that has generated a variety of interpretations over the years. In this passage Peter says that “He was put to death in the body but made alive in the Spirit. After being made alive, he went and made proclamation to the imprisoned spirits — to those who were disobedient long ago when God waited patiently in the days of Noah while the ark was being built.”

Who Did He Preach to?

This passage raises several questions. Who were these imprisoned spirits, where were they, what did Jesus proclaim to them, and when did he do this? The who and where questions seem to be answered in Jude 1:6, “And the angels who did not keep their positions of authority but abandoned their proper dwelling—these he has kept in darkness, bound with everlasting chains for judgment on the great Day.” These spirits that Jesus proclaimed to are fallen angels, maybe from the time of Noah, who are in prison awaiting judgement.

What did Jesus proclaim to these imprisoned spirits? It hardly seems reasonable that he would be proclaiming the gospel to them as some have supposed. Rather it is likely that he is proclaiming his victory over them in their rebellion against God. It was by means of the cross that he defeated Satan and the angels aligned with him (Col. 2:15).

When Did He Preach to Them?

If, on the other hand, it refers to something that happened at his death, then it is easy to see Jesus paying a visit to those imprisoned spirits before his resurrection. But whichever way we understand this passage, it offers no support for the popular idea that Jesus was a prisoner of hell during that time. For that we must look elsewhere.

The Apostle’s Creed is an early statement of Christian belief that is of unknown origin and date. Included in this creed is the statement about Jesus that he “was crucified, died, and was buried; he descended into hell. On the third day he rose again.” The expression “he descended into hell” is controversial. Some denominations eliminate it. Others change it to say that he “descended to the dead”.

I believe that it is important to recognize that the Apostle’s Creed is not Scripture and was never considered to be such. It is largely based on the Scripture though. Except for the statement about Jesus descending into hell. Nowhere in the Scripture is something like this found. The closest would seem to be 1 Peter 3:18-22, discussed above. Some have also seen Ephesians 4:9 as referring to this, although I think it more likely this refers to his incarnation.

What is clear from Scripture though is that Jesus was not a prisoner in hell for that three days. In fact, Colossians 2:15 would seem to say just the opposite, “And having disarmed the powers and authorities, he made a public spectacle of them, triumphing over them by the cross.” It was at the cross that Satan and those aligned with him were defeated. If Jesus did descend into hell, it was as a victorious conqueror rather than a chained prisoner.

In Paradise Seems to be the Best Answer

In the end, I do not believe we can know for sure just what Jesus did during those three days, other than being in Paradise. There, we can see him greeting those who had entered before him as well as the repentant thief who entered with him. And even though he has been resurrected, I believe he still is there with believers as we await our own resurrection (Phil. 1:23).

2 thoughts on “Where Was Jesus During the 3 Days Before His Resurrection?”