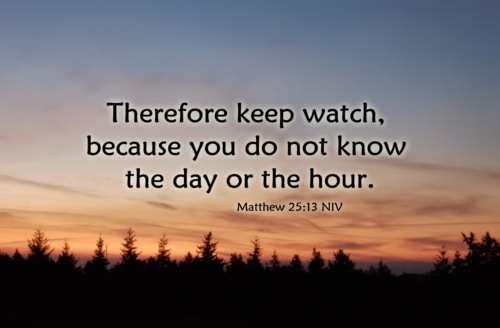 In the 24th chapter of Matthew, Jesus shares with his disciples some information about his return and what to expect as his return draws near. He concluded that teaching with a warning (24:36-44) about being ready because the time of his return will not be known until it occurs. When he comes back, it will be suddenly and without warning. And some will be taken and others will be left. But what will determine who is taken and who is left?  He answers that question in a pair of parables that follow.

Being Ready for His Return

The first, in Matthew 24:45-51, is about a servant who has been left in charge of the master’s household while he was away for an unspecified period of time. Eventually the master returned and checked up on the servant to see how he has done. If he was doing what the master left him to do, then all is well and he will be rewarded. But if he was not following his masters direction, but is doing his own thing instead, he can expect nothing but punishment. In this case, being ready equates to being faithful to the master until his return.

Matthew 25:1-13 has the second, and better known, of these two parables. In this parable we find a group of ten virgins who have gone out to meet a bridegroom. The bridegroom takes longer than expected to arrive and they all fall asleep. When he does come they awaken, and five are able to light their lamps while the other five are not. These five have to go into town and buy oil for the lamps. While they are gone the five virgins with oil in the lamps are allowed into the wedding banquet. But the others are denied entry when they finally return.

This parable is a bit strange to most of us because it does not really picture the way we do weddings today; at least in the U.S.. Donald Carson, in the NIV Bible Commentary, says this about the setting of this parable.

The setting is fairly clear from what we know of the marriage customs of the day.  Normally the bridegroom with some close friends left his home to go the the bride’s home, where there were various ceremonies, followed by a procession through the streets – after nightfall – to his home.  The ten virgins may be bridesmaids who have been assisting the bride; and they expect to meet the groom as he come’s from the brides house.  Everyone in the procession was expected to carry his or her own torch.  Those without torches would be assumed to be party crashers or even brigands.  The festivities, which could last several days, would formally get under way at the bridegroom’s house.

Given the context of this parable (the 24th chapter of Matthew), the bridegroom’s coming would seem to represent Christ’s return for his people, with the ten virgins being similar to the two working in the field (24:40) or the two grinding at the mill (24:41). One of the workers in each pair was taken and the other left, just like five of the virgins join the procession and five are left out in the cold.

What Distinguishes Between Those Taken and Those Left?

So what is it about these ten that determines who is taken and who is left behind? All ten are described as virgins. All ten had lamps. They all went out to meet the bridegroom. All ten fell asleep while waiting for him. So far there is nothing that would allow us to tell one from the other. What is different is that five of them take along oil for their lamps, while five do not. While they are waiting for the bridegroom, this oil, or lack of oil, seems not to make any difference. They stay together and all do the same things, including taking a nap.

But what happens at midnight when the bridegroom comes? The announcement is made, the virgins wake up and attempt to light their lamps so they can join into the festivities. For five of them this is no problem. They have planned ahead and are ready. But the lack of preparation on the part of the other five now comes back to haunt them. Too late, they get oil and return, only to find themselves locked out and excluded from the party: they were not ready when the bridegroom came, and were left out.

The moral of this parable appears to be clear: be ready for Jesus return. What does it take to be ready? Look back at the virgins in this parable. I find it interesting that all ten of them apparently wanted, at some level, to be included in the festivities. And all of them probably looked alike and spent their time waiting together. So it would seem like hanging out at church, accumulating merit badges, and learning all the Bible stories does not get one ready for the bridegrooms coming.

Five of them were foolish, apparently believing that just showing up was enough. So how can I be ready for his return? Believe on the Lord Jesus Christ, and you will be saved (Acts 16:31)! But belief is not a one time experience, nor is it solely an intellectual activity: it is a commitment of ones life to the lordship of Jesus. The first of the two parables illustrates this. If he is your Lord, which is known if you obey him, then you are ready. If not, it’s not yet too late.