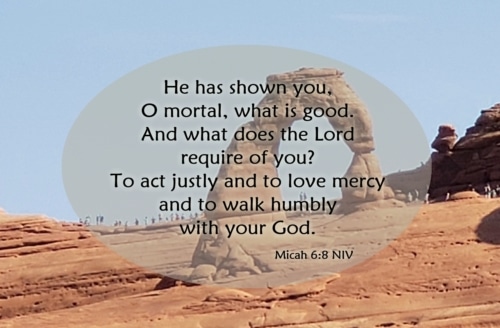 What does God expect of me as a believer? It is common, and tempting, to believe that God ‘s expectations for me are to live a life as free as possible from sin; avoiding doing any of the things that fall on your particular list of sins. The focus too often times seems to be on what we don’t do. But should it be?

Now I will not dispute that as a believer, I should avoid doing things that will bring discredit to the name of Christ, that cause harm to others, or that are self centered. But I have also come to realize that were I to actually be able to live a life that was guiltless before the law, either man’s or God’s, that I would still fall short. In fact, I believe that what I do is more important than what I don’t do. Even in the Old Testament, where the Law reigns supreme, we find this remarkable passage.

He has shown you, O mortal, what is good.
And what does the Lord require of you?
To act justly and to love mercy
and to walk humbly with your God.

What does God require of me? Not to obey the law. Not to offer sacrifices. And not to be sinless. Act justly, love mercy and walk humbly before him. That is not a license to sin freely. But it is a challenge to make a difference in the world around me as a child of God.

In Luke 18:18-23 we see a young man of wealth approach Jesus. “What do I need to do to inherit eternal life“, he asks Jesus. The response is to obey the commandments, which he affirms he has done. Then Jesus tells him something unexpected. Obeying the commandments is not enough: there is something else you need to do. “Sell all you have, give it to the poor, and then follow me.” And like many of us, it was too much for him. He was comfortable with his life. Surrendering all he had in order to follow Jesus around the country was just too much to ask. Walking humbly with Christ (God) is not as easy as just following a set of rules. But how can I claim to be his disciple if I don’t follow him?

Parable of the Talents

In Matthew 25:14-30, Jesus told a parable of three servants whose master left them with a sum of money and then went on a journey. At his return he called each of them in to give an account of their service. Interestingly, he did not ask them if they had been good servants and obeyed the rules. Instead he wanted to know what they had done with what he had entrusted them with. Two had made good use of the resources given them and were rewarded. The third had done nothing with them, and was cast out. What is it that makes the master (Jesus) happy? Using what he has entrusted us with in his kingdom‘s work.

Parable of the Sheep and Goats

Following this, Jesus tells another parable, this time about Christ dividing people, like a shepherd divides the goats from the sheep. On one hand are the sheep, those who have seen a need and acted to meet that need. They are invited to partake of their inheritance in the Kingdom. On the other hand are the goats, those who chose not to respond when they saw others in need. And they are cast out into eternal punishment. In neither case are they judged by adherence to a set of rules. The judgement is not based on sin avoidance. Rather it is based on acting justly and loving mercy.

John reinforces the message of the above parable in his first epistle. If I see a brother in need, and I have the ability to meet that need, but do not, then God’s love does not dwell in me. Again, it is my actions here that are important; what I do, rather than what I don’t do.

What does God Require?

So what does God require of me? He does expect that I will live a holy life. A life that is set apart for him. That does indeed mean that I put to death, or let go of, anything that would get in the way of being able to serve him; especially surrendering to my own selfish desires. But holiness is much more than that. It means that I am dedicated to his service. I become an instrument that he can use in accomplishing his purpose here. It means that I walk humbly before my Lord, responding to his purpose in my life, making a difference in the world around me.

Don’t be satisfied with obeying the commandments, like the rich young man, and miss out on hearing “well done, good and faithful servant.” Instead, use the resources the master has given you to honor him, and then “enter into the master’s happiness.“