Home » Christianity » Theology » Doctrine of Salvation » What Must I Do to Be Saved? Believe in Jesus! 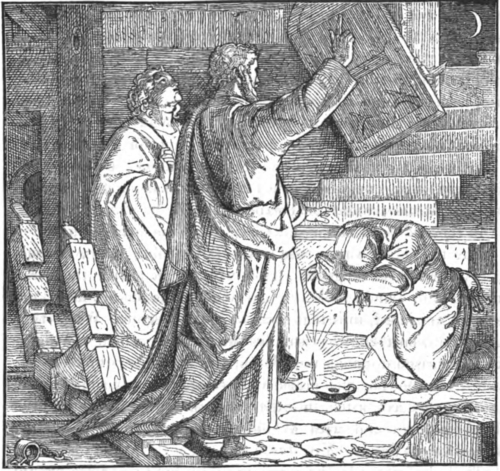 This is the question the Philippian jailer asked Paul and Silas in Acts 16:30. And it is a question that has been asked countless times and in different ways in the 2000 years since then. What must I do to be saved?

The short answer to the jailers question is deceptively simple, “believe in the Lord Jesus, and you will be saved.” All I have to do is believe. The Scripture repeatedly expresses the same thought. I must believe. Or, stated another way, I must have faith. And that’s it. Can it really be that simple?

What Does It Mean to Believe?

Understanding what it means to believe is crucial in understanding Paul’s answer to the jailer. Is belief an intellectual activity? As in, I believe the earth orbits the sun. Or is there more to it than that?

The word translated here as believe is pisteuō. It means “to believe, put one’s faith in, trust, with an implication that actions based on that trust may follow.” So it would appear to be more than an intellectual exercise. It involves an active trust or faith.

I might say that I trust my wife. But what if she takes me downtown. Then blindfolds me, takes me by the hand, and starts to walk. Will I trust her then? Trust her to guide me safely through the busy streets of Seattle?

That is what pisteuō means. It is not saying that I trust. But it is demonstrating that trust by my actions. Paul does not tell the jailer to give intellectual ascent as to who Jesus is. Instead, he calls on him to entrust his life to the lordship of Jesus.

The Relationship between Faith and Works

Among those who would hold to the truthfulness of the Bible, there is little argument on the necessity of belief. Salvation comes by believing in Jesus. Acts 16:30-31 states it explicitly.

Is there something I must do beyond belief in order to be saved? Do I first have to put my house in order? Cleaning up my language and habits that seem contrary to godliness. Is baptism essential? Or is there some other necessary activity on my part? I don’t believe so.

As one who has believed, is there something I have to do in order to stay saved? Are there specific activities I need to engage in: Bible reading, prayer, tithing, attending a local church . . . ? And if so, where do I find the list of those activities? Again, I don’t believe we work to maintain our salvation.

Or could it be that salvation starts and ends with belief? At least on my part. If that is so, then am I free to do what I want? As Paul would say “By no means.” Belief is trust in God. It is an active verb. It changes my life. As I trust God, he changes me and produces his fruit through me. Works come because I am trusting God to transform me.

The Source of Belief

Where does belief, or faith, come from? Is it something that comes from within the individual? Or is belief something given to the believer as a gift of God?

There are those who would strenuously argue for both of these alternatives. And both sides use the Bible to support their position. I would be foolish to claim that the Bible is clear on the answer to this question. But what is clear is that belief is required of us. And that not all will believe. There are many who for one reason or another will refuse to believe.

I believe that God calls all of us to faith. But not everyone responds in faith and is saved. God does everything but force me to believe.

The Duration of Belief

Another aspect to believing in Christ concerns the duration of that belief. Is it possible for a saved person to become unsaved? Or will a saved person never fall from that state?

Look back a moment at what Paul tells the jailer. In order to be saved, you must believe in the Lord Jesus. And remember that belief is not intellectual ascent. Belief is not just something I do at some point in time; something that I look back at and remember.

Again, this is a much debated topic with vocal proponents on both sides, each armed with copious amounts of Scripture. But the way I understand it, the wrong question is being asked here. It is not a matter of whether or not one can lose their salvation. Rather, the question should be, were they ever saved in the first place.

A Look at the Moment of Salvation

My understanding of belief is that it can be divided into three phases. The first is that moment when a person puts their trust in Christ; the past tense. The second concerns their walk with Christ; the present tense. And the final point comes at the end of their earthly life; the future tense.

Is There an Intellectual Component to Belief?

Do my mental beliefs matter? Is right doctrine important to my salvation?

I recently asked this question in a number of the social media forums that I participate in. And I received a variety of answers. Most agreed that believing in Jesus was the only essential. Others added belief in the Trinity and the dual nature of Christ. Some added Biblical inerrancy. And others added additional beliefs.

So who was right? To some extent you might say that most of them were right. Remember that belief is a journey. To start that journey all I need to do is put my trust in the Lord Jesus. That probably includes my acknowledgement of being a sinner in need of a savior, repenting of my sin, and putting my trust in Christ. But is any more required? The example of the thief on the cross would seem to argue that there is not.

But correct beliefs are important to truly knowing God and being in right relationship with him. In the 48 years of my faith journey, my understanding of God has grown tremendously beyond repentance and confession of Christ. While I would stop short of claiming that any of those beliefs are essential to salvation, I do believe that many of them are critically important. What I believe truly matters.

Holding to false beliefs can damage your relationship with God, and potentially even cause you to leave the journey of faith. In 1 Timothy 1:3-11 Paul charges Timothy concerning those who teach false doctrines. He says that they have departed from faith and a good conscience.

In the end, salvation is totally the work of God. All I am called to do is to accept his work in my life. What must I do to be saved? Believe in the Lord Jesus, and you will be saved (Acts 16:30-31).