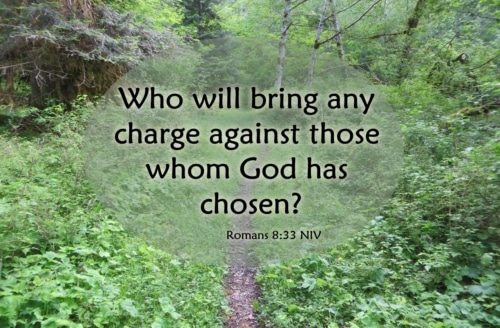 Who will bring any charge against those whom God has chosen? It is God who justifies. Who then is the one who condemns? No one. Christ Jesus who died—more than that, who was raised to life—is at the right hand of God and is also interceding for us.

In this passage Paul asks a series of rhetorical questions. Who will bring a charge against those God has chosen? While some certainly might, it is God who has justified them. And if he has justified them, then what charge could stick?

Then he asks, who will condemn the one that God has chosen? Again, while someone might, no one who has any authority in the matter can do so.

And why can no one successfully condemn us? Because Christ died for us. And not only that. He is now sitting on the right hard of God interceding for us.

You might picture it this way. God is the judge and I stand before him with an accuser next to me. But next to the judge sits my advocate, one who will speak for me. When the accuser brings a charge against me, the advocate will tell the judge, “this is one that I have died for. His penalty is paid” And the charge against me will be dropped.

Paul here is talking to those whom God has foreknown, predestined, called, justified, and glorified. To those that Christ has died for. Who is it who will successfully be able to tell God that he made a mistake and I should not be justified? Praise God. No one can!