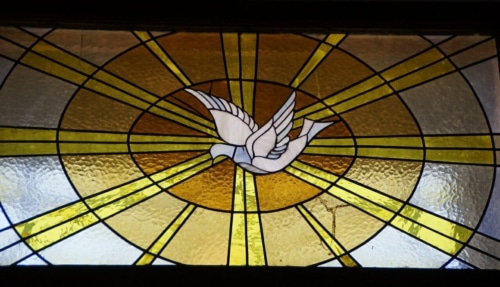 I grew up in, and am still a part of, a denomination that steers clear of the baptism of the Holy Spirit and speaking tongues. It is generally not so much that they are opposed, as that they are ignored. Although it must be said that anyone who claims to speak in tongues is generally thought to be a bit suspect.

But what my denomination thinks, or what my charismatic brethren think is not nearly as important as what the Scripture has to say about these topics. I want to look at all of the passages that speak of baptism of the Holy Spirit and speaking in tongues and try and understand biblical teaching concerning this.

What is the Baptism of the Holy Spirit?

There are three passages that I am aware of that connect baptism with the Holy Spirit. And there is a fourth passage that I believe is related to these other three. In two of these passage tongues are involved, but not in the other two.

In Acts 1:5 Jesus tells his disciple that “John baptized with water, but in a few days you will be baptized with the Holy Spirit.” He tells them this shortly before his ascension. And this seems to correlate well with Acts 2:1-12. This passage relates the outpouring of the Spirit on the believers at Pentecost. This is often considered as the foundational event for the church.

Along with the outpouring of the Holy Spirit, the disciples spoke in other languages. Languages that it turns out were intelligible to the others who had come to Jerusalem for Pentecost. People speaking a variety of native languages. And each of them was able to understand what the disciples were saying.

There are a couple of things to note about this event. First, it was the initial experience with the Holy Spirit for these disciples. There is no record of the Holy Spirit’s presence in their lives before this. And Acts 1:8, where they are told to wait for the coming Holy Spirit, would argue against this being a second encounter with the Spirit.

A second thing to note is that the tongues here are not a spiritual language as seems to be the case in 1 Corinthians 14. Here the language spoken by the disciples is intelligible and meaningful to the hearers. Without any interpretation.

The tenth chapter of Acts records Peter’s encounter with the Roman centurion Cornelius. Peter proclaims the gospel to Cornelius and his household. And while doing so the Holy Spirit is poured out on them and they begin to speak in tongues (Acts 10:44-26). This proves to Peter, and those with him, that God had accepted these Gentiles.

In Acts 11:16, Peter, while related his encounter with Cornelius in the previous chapter, says “then I remembered what the Lord had said: ‘John baptized with water, but you will be baptized with the Holy Spirit.’” This outpouring of the Spirit on the Gentiles was considered to be similar to what had happened at Pentecost.

This event is also similar to what happened with the Samaritans in Acts 8:14-17 and to a group of John the Baptist’s disciples in Acts 19:4-7. When they believed, they were filled with the Holy Spirit and spoke in tongues.

For all three of these events, the Holy Spirit coming on them was at their initial point of salvation. It was not a later event. And, in all three cases, the tongues seemed to serve as a sign to the other believers that God had accepted these previous outsiders.

The church at Corinth is the only church that Paul writes to about tongues. In Chapter 12 of his first letter to them he mentions tongues in reference to spiritual gifts. Then, in the 13th chapter they are mentioned as someday passing away. And, finally, in chapter 14 he discusses the use of tongues, especially when the church meets together.

It is in 1 Corinthians 12:13 that Paul mentions the baptism of the Holy Spirit. Here he says that “we were all baptized by one Spirit so as to form one body—whether Jews or Gentiles, slave or free—and we were all given the one Spirit to drink.” What this baptism accomplishes is to make us a part of the body of Christ.

There is no specific connection with tongues in this case. And, like all of the other passages discussed so far, it appears to be the initial experience that all believers have. We are all baptised by the Holy Spirit into the body of Christ.

The final passage to look at is Galatians 3:27; “for all of you who were baptized into Christ have clothed yourselves with Christ.” This passage has nothing to do with tongues. But it, like all of the others, points to this baptism of the Holy Spirit as being the common experience of all believers.

What Is the Gift of Tongues?

The only mention of tongues in the Bible are those that are listed above. And they seem to be used in two distinct ways.

The use of tongues in Acts seems to be related to their use as a sign. At Pentecost, with the Samaritans, with Cornelius, and with the Ephesian group, tongues demonstrate the presence of the Holy Spirit. At Pentecost it is a demonstration to those outside the body of believers. In the other three cases it seems to be more a sign to the believers. A sign that God has accepted a group of people who were on the outside. And this does seem to correspond to some extent with the concentric circles of outreach mentioned in Acts 1:8.

The other use of tongues is in 1 Corinthians. Here it is for the use of the body. More specifically, for individuals within the body. Paul describes it as the individual’s spirit communicating with God (1 Cor. 14:14-15). Like all of the gifts, it is given at the discretion of the Holy Spirit. And, Paul says, it is a desirable gift. But not as useful to the church as gifts such as prophecy that will build up the body.

Some of my charismatic brethren teach that the baptism of the Holy Spirit is a ‘second blessing’. Something that happens to believers at some time after they come to Christ. And, further, that speaking in tongues is an evidence of this second blessing.

But I find no reason to believe that my initial salvation experience and the baptism of the Holy Spirit are separate events. Every mention of Holy Spirit baptism I can find in the Scripture points to it as being synonymous with salvation. It is the Holy Spirit’s baptism that brings us into the body of Christ. If we have not been baptised by the Holy Spirit, then we are not of Christ.

4 thoughts on “Baptism of the Holy Spirit and Tongues”