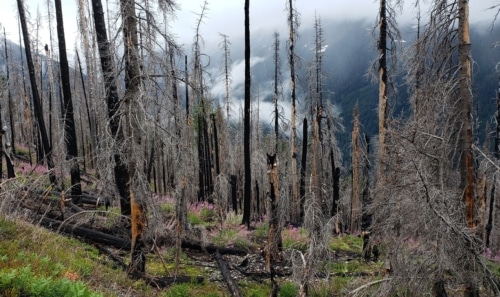 So Obadiah went to meet Ahab and told him, and Ahab went to meet Elijah. When he saw Elijah, he said to him, “Is that you, you troubler of Israel?”
“I have not made trouble for Israel,” Elijah replied. “But you and your father’s family have. You have abandoned the LORD’S commands and have followed the Baals.

Ahab is described as the most wicked king Israel has ever had (1 Ki. 16:30). God had sent the prophet Elijah to confront him and told him that it would not rain in Israel for the next few years because of Ahab’s sin (1 Ki. 17:1). And now, three years later, Elijah again confronts Ahab and, ultimately, the prophets of the false religion that Ahab supports.

When Ahab meets Elijah he accuses him of being the cause of all of the trouble that has come to Israel because of the drought. But Elijah turns the charge back onto Ahab. The trouble that Israel is experiencing is because of what Ahab has done in leading Israel away from the worship of God, turning to Baal instead.

I find this passage especially relevant today in the United States. There are so many who are blaming the Church for much of the problems that our country is facing. These folks have rejected the teaching of the Scripture as being irrelevant to today’s world and teaching a message of intolerance. And they label as intolerant anyone who would advocate a biblically based lifestyle.

The Cause of the Nations Troubles

And Elijah’s response to them is just as relevant today as it was nearly 3000 years ago. It is those who have rejected God and his commands for us who are the cause of much of the trouble that we face. Because we have rejected God, is it any wonder that we do not experience his blessings, but instead experience trouble as a nation?

As a nation, we worship the gods of humanism, naturalism, materialism, scientism, and self. And we are paying the price for living in denial and rebellion against God. I believe that the only hope we have as a nation is to turn from our false gods and back to the God of the Bible. The one who created us, knows us best, and has the answers to what currently troubles us as a nation.