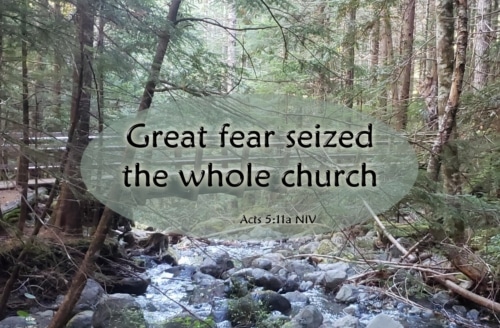 Great fear seized the whole church and all who heard about these events.

This account could, in a way, be thought of as humorous. If it was not so tragic. It actually starts at the end of the previous chapter. There you see the believers selling land or houses and giving the money to the Apostles to care for the needs of the poorer members of the church. One in particular who does this is Barnabas, who later travels with Paul.

Acts 6 opens with a second person, actually a couple, who do the same thing as Barnabas, almost. With quite different results. Apparently Ananias and Sapphira decided to keep part of the money gained from the sale for themselves. And there was nothing wrong with that. There was no requirement for them to give anything.

But, unfortunately for themselves, they claimed that they gave the whole amount to the Apostles. Likely an act of pride, wanting the acclaim that Barnabas received. And it cost them dearly. Their lie was not just to the Apostles. It was also to God. And that lie cost them their lives. We might see that as being an excessive punishment. Especially since we are all to often guilty of lying to God. But I believe God was trying to teach a lesson to the infant church. That God knows our hearts, and will hold us accountable for what is in them.

In the Church Today?

Luke says, at the end of this account, that great fear seized the whole church. As well as anyone else who heard about it. I wonder how we would respond today if that happened within one of our services. Clearly the civil authorities would be all over us. But what impact would it have on the church? Would we see revival break out with renewed commitment to God? Would we see a fearful mass exodus from the church? Or maybe both?