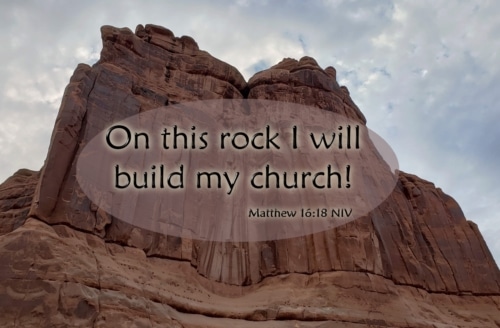 “But what about you?” he asked. “Who do you say I am?”
Simon Peter answered, “You are the Messiah, the Son of the living God.”
Jesus replied, “Blessed are you, Simon son of Jonah, for this was not revealed to you by flesh and blood, but by my Father in heaven. And I tell you that you are Peter, and on this rock I will build my church, and the gates of Hades will not overcome it.

In this passage Jesus asked his disciples who they thought he was. Peter responded with “You are the Christ, the Son of the living God“. To which Jesus responded that God had revealed that to him, and that upon that rock he would build his church. Many believe this ‘rock’ that the church is built on was Peter. But most of the rest of us believe that the rock was the truth that God had revealed to Peter concerning Jesus’ identity; that he is the Messiah.

But what is the church? This word is used twice in the gospels, both times in Matthew. And it is used frequently throughout the rest of the New Testament; but never with an explicit description of what, or who, the church is, and what its purpose is. The word generally translated as church is the Greek word ekklēsia which more literally means “called out” or “called forth”. It was generally used in Greek to reference a civic assembly that was called together for a specific purpose, i.e Acts 19:39.

The above described the ‘who’ of the church, which is part of the ‘what’ question. But ‘why’ is also a very important part of ‘what’ the church is. Why is it that we are called out of the world and into assembly together? For too many people in the church, or hanging around the church, the answer is either a blank look, or something like “to worship God”. Now I find it hard to believe that God had no purpose in ‘calling’ us out. Nor do I really believe he takes great delight in us assembling together on Sunday to sing a few songs and listen to a sermon; as inspiring as either might be.

We do not always designate Jesus’ followers prior to Pentecost as the church. But they were ones he had called out from the rest of the world. And they had been assembled with him for over 3 years. And the last thing he does with them before his return to the Father is to commission them. Matthew’s version, in Matthew 28:18-20, or Luke’s version in Acts 1:8, both tell the same story. We are to go out into the world and tell people about God; bringing others into the assembly; making disciples of them.

I believe that commission contains our marching orders, to represent God to a world that is sorely in need of him. And that is the picture we see painted in Acts, as the gospel is taken into wider and wider circles; into all the world. Here the church is intentionally sharing the gospel where they are, and going to places the gospel hasn’t yet reached.

Nowhere, apart maybe from the letters to the seven churches in Revelation 2 & 3, do we find a church that withdrew from the world to be a safe haven for beleaguered believers. And yet too often that is what we have become today. Too often we sit within the comfortable confines of our safe walls. We sing nice uplifting songs. We study the Bible. And we moan about how the world around us is going to hell in a handbasket. The closest we come to taking the gospel to them is when someone wanders in off the street and sits through a sermon. Then we wonder why the church is not growing!

Of course there is more to life in the body that proclaiming the gospel. It is appropriate for us to worship our Lord; to grow and develop as disciples; to love each other in personal and practical ways. Worship should be a natural expression of who we are.  One of my favorite parts of Revelation is the scene described in chapters 4 & 5. Here we see the 4 living creatures praising God; followed by the 24 elders; bazillions of angels and every creature, including those on the earth. Too often we follow the lead of a worship team on the stage at the front of the building we meet in on Sunday to set the tone of our worship. Consider following the lead of the 4 living creatures instead; and be constantly in a state of worship around the throne.

Part of the Great Commission in Matthew is teaching the disciples to follow Jesus direction. And the example of the earliest church is that they were devoted to the teaching of the Apostles. The New Testament church was eager to learn all they could about God; the good news about Jesus; and about living as God’s called out ones. Following their example would help us to grow in our knowledge of God, both intellectually and relationally. And it would help us be more effective in sharing with an increasingly skeptical world.

The Destiny of the Church

The church is not just an assembly of believers while we hang around earth waiting for our promotion. The church is also described as the bride of Christ. One of the most interesting parts of John’s vision in Revelation is his description of the bride of Christ in chapters 21 & 22. Here the bride is described as a pretty spectacular city; an eternal city. The church will be around for eternity. Not the SBC, or the Roman Catholic, or Methodist, but the assembly of called out ones. That may be why Jesus and his apostles were so insistent that we love each other and get along here. A part of being the church, the body, the bride, is to lose ourselves and become one; like Christ and the Father are one; to love one another.