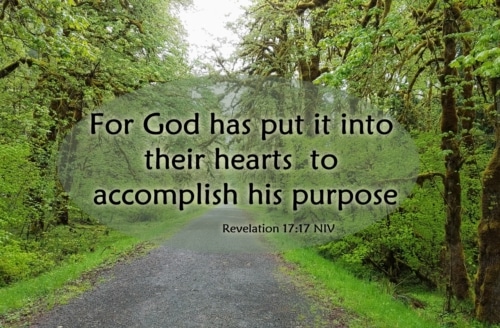 The beast and the ten horns you saw will hate the prostitute. They will bring her to ruin and leave her naked; they will eat her flesh and burn her with fire. For God has put it into their hearts to accomplish his purpose by agreeing to hand over to the beast their royal authority, until God’s words are fulfilled.

It would be easy to miss this ‘behind the scenes look’ at what is happening in Revelation. Much of what is going on happens at God’s direction. However, there are other actors, like the dragon and the beast, who appear to be acting in opposition to God. Yet, in this passage, we see that God’s purpose is being accomplished. Even in the actions of those who are opposing him.

Chapter 17 describes a prostitute sitting on a seven headed beast with ten horns. The chapter describes the prostitute along with the heads and horns of the beast. There are any number of explanations as to who they represent. But what is clear is that the prostitute is not very nice. She is leading the world astray, and is drunk on the blood of the saints. And the ten horns make war on the Lamb and are defeated. Then, in union with the beast, they turn on the prostitute and destroy her. And they do this because God puts it into their hearts to carry out his purpose.

I do not believe in divine determinism, that God directs and causes every action that occurs throughout the universe. But I do believe that God has a purpose that he is directing creation toward. And God uses people and nations to carry out that purpose. This is clearly seen here as even the beast (the Antichrist) and those associated with him, are unknowingly working to carry out the purpose of the one they are trying to overthrow. That should give encouragement to us when we see the world getting worse and worse. God is really in control, and is using all that happens for his ultimate good.