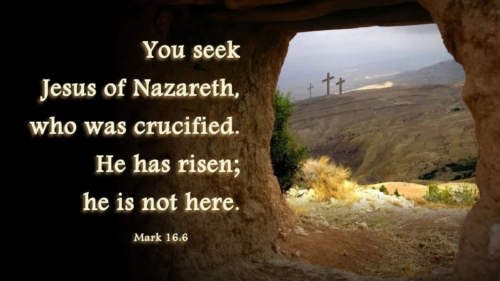 “Don’t be alarmed,” he said. “You are looking for Jesus the Nazarene, who was crucified. He has risen! He is not here. See the place where they laid him. – Mark 16:6 NIV

On that first Easter morning the women had come to the tomb to anoint Jesus body with spices. It was a time of grief for them. They had seem him crucified and buried. And this was one last act of love on their part before going home. But one obstacle remained; the large stone in front of the tomb. How could they move it to be able to anoint Jesus body?

I can imagine their shock, and horror, on arriving at the tomb and finding it standing open. Had someone been there already and stolen his body? Then they went into the cave tomb and found an angel, looking like a young man in white sitting on the shelf where Jesus should have been. This was not at all what they had expected, and they were alarmed.

But then they heard what has to have been the best news ever proclaimed. You are looking for a crucified Jesus. But he is not here. He has risen from the dead.

Could it be true? They had witnessed his crucifixion. They knew he had died. Could Jesus really be alive again? Indeed he was. Death could not keep him in the ground (Acts 2:24). And his victory over death gives victory over death to all who will believe in him (1 Cor. 15:51-57). Thanks be to God! He gives us the victory through our Lord Jesus Christ.