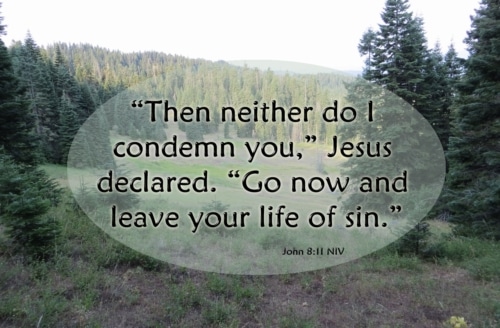 I like rules and structure. And I like knowing what is expected of me. I suspect I might have thrived under the Old Testament Law because it can be so black and white and I would know what was expected of me. And I find within myself the tendency to expect the same from other people, wanting to hold them to the same set of rules that I follow, and not always being very merciful when they fall short.

Then Jesus takes aim at my heart and lets me have it.

At dawn he appeared again in the temple courts, where all the people gathered around him, and he sat down to teach them. The teachers of the law and the Pharisees brought in a woman caught in adultery. They made her stand before the group and said to Jesus, “Teacher, this woman was caught in the act of adultery. In the Law Moses commanded us to stone such women. Now what do you say?” They were using this question as a trap, in order to have a basis for accusing him.

But Jesus bent down and started to write on the ground with his finger. When they kept on questioning him, he straightened up and said to them, “Let any one of you who is without sin be the first to throw a stone at her.”  Again he stooped down and wrote on the ground.

At this, those who heard began to go away one at a time, the older ones first, until only Jesus was left, with the woman still standing there. Jesus straightened up and asked her, “Woman, where are they? Has no one condemned you?”

“Then neither do I condemn you,” Jesus declared. “Go now and leave your life of sin.”

Under Old Testament Law, a person guilty of adultery was to be stoned to death. In the account above, a woman who had been caught in the act is brought before Jesus, in an attempt to get him to pass judgement on her. It was, after all, what the Law commanded, although the man should also have been charged as well. Will Jesus side with the Pharisees and condemn this woman; or would he go soft and let her off?

But Jesus, to the consternation of her accusers, did neither of these. He did recognize her sin and challenged her to leave it behind. But he also knew the sin of her accusers, and unlike them, he did not judge the sins of others to be worse than one’s own sins. Instead he challenged her accusers to examine their own lives to see if any of them were qualified to serve as judges. And they all left.

I find killing an unborn child to be incomprehensible. The same goes for those who take pleasure in abusing others, or taking advantage of those who are weaker, and many other things that we do to each other. Surely those things are worse than driving a little faster than I should, or not being generous when I have the opportunity.

But sin is sin. If I have fallen short of God’s expectations for me, then I have fallen short. And that is the condition we all find ourselves in, falling short. But fortunately God extends grace and mercy to us, regardless of what I was, and sometimes continue to be. And if he does, should I not as well?

That is not to say, however, that there should be no consequences to our actions. I do believe one of the roles of society is to protect us from each other. And punish those who act in ways that are not socially acceptable, or bring harm to others. And it is appropriate to judge murder as worse than a minor traffic offense and punish accordingly. Without that, the law of the jungle would prevail, and the strong would rule over the weak.

But it is not for me to look down on and despise those who fall short of my own supposed level of perfection. When I do that, I am no better than they are. Instead I should demonstrate love and mercy to all I come in contact with. I should reflect toward others the grace that God has shown to me. When given the choice between responding in grace and mercy or with the dictates of the law, I should choose grace.