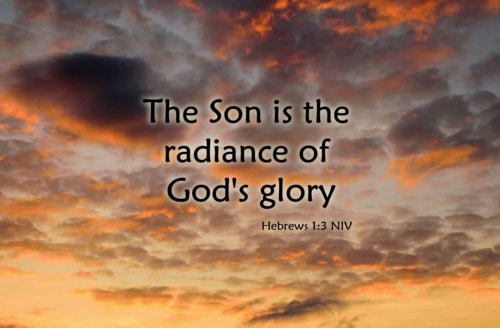 In the past God spoke to our ancestors through the prophets at many times and in various ways, But in these last days he has spoken to us by his Son, whom he appointed heir of all things, and through whom also he made the universe. The Son is the radiance of God’s glory and the exact representation of his being, sustaining all things by his powerful word. After he had provided purification for sins, he sat down at the right hand of the Majesty in heaven. So he became as much superior to the angels as the name he has inherited is superior to theirs.

The author of Hebrews has a lot to say about both the person and work of Jesus. He starts off by comparing the way that God spoke to us in the past with how he speaks to us now. In the Old Testament he spoke to us via the prophets. In the New Testament era he spoke to us through his Son. But who is this Son? He was appointed heir of all things, and he was one through whom the universe came into being. But who is he?

In this third verse of Hebrews we find two expressions describing the nature of the Son. In the first of these we find that the Son is the radiance of God’s glory. Radiance, or apaugasma, is a shining forth, the light coming from a luminous body. The word can refer either to the direct radiance or to a reflection; to the direct light from the sun, or the sun’s light reflected from the moon. Regardless which way you take the word, it is telling us that when we see the Son, we see God’s glory.

And the Son, Jesus, is the reflection of that glory. When we see Jesus, we see God. In John 14:9 Jesus tells Philip that “Anyone who has seen me has seen the Father.“